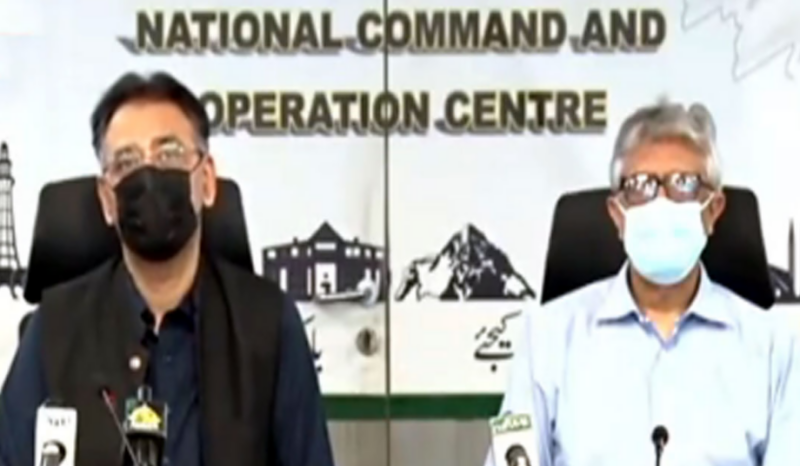 Islamabad (Web Desk): Minister for Planning and Development Asad Umar, who also heads the National Command and Operation Center (NCOC), on Tuesday announced that complete vaccination has been made mandatory for all international, domestic air travel from September 30.

Speaking at a media briefing along with Special Assistant to the Prime Minister (SAPM) on National Health Services Dr Faisal Sultan, the minister said that that school teachers and staff will not be allowed to work after October 15 if they have not taken the jabs.

He said that the students over the age of 17 years will have to get one dose of vaccine by September 15 and the second dose by October 15 in order to continue their studies at the educational institutions.

Asad said that the forum also decided to open anti-COVID vaccination for the youth in the age bracket of 17 to 18 from September 1.

“For those using the public transport including trains, metros and buses, will also have to get both the doses by October 15 in order to continue to avail these services,” the NCOC chief said, adding that visitors at shopping malls, hotels, restaurants and weddings should get first dose by August 31 and second jab by September 30 to enter the premises.

The minister said thousands of vaccination centers have been established across the country with mobile vans also operating. He said the people should themselves vaccinated for their own safety and those of others.

Speaking on the occasion, SAPM Dr Faisal Sultan said that vaccination for those falling in the age brackets of 15 to 16 will also be opened.

He said a special vaccine will be administered to the immunocompromised people from September 1.

He said that those immunocompromised citizens of age 12 years and above would get special recommended COVID-19 vaccine on mega vaccination centers.

The SAPM said that the government has started consideration to initiate booster after six months of second shot to above 50-year frontline healthcare workers. He said after consultation this booster was likely to start from October 1.