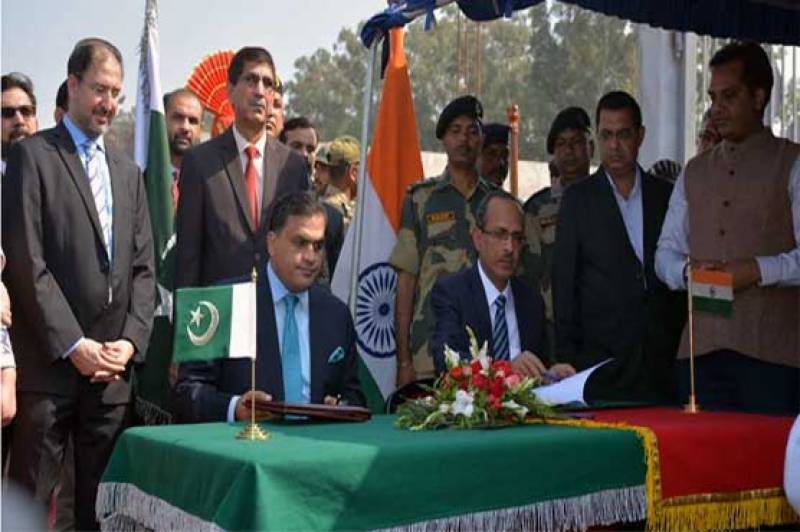 According to details, Director General (DG) South Asia and SAARC at Ministry of Foreign Affairs (FO) Dr Mohammad Faisal signed the agreement on behalf of Pakistan while the Indian side was represented by its Joint Secretary for Home Affairs S. C. L. Das.

Addressing the media after the signing of the agreement, FO spokesperson Dr Mohammad Faisal said the agreement will facilitate pilgrims to visit Gurdawara Kartarpur seven days a week from dawn to dusk.

He said the yatrees will come in the morning and return back in the evening. He said the Yatrees will be able to enter the Pakistani territory after a procedure of two or three minutes.

Dr Mohammad Faisal said under the agreement, India will provide a list of Yatrees ten days before their visits so that they could be properly received.

He said the first group of Yatrees will come on the ninth of next month.

“As per our commitment, this will be a visa free travel for the yatrees. Only nominal service charges of $20 per Yatree will be charged’, the FO spokesperson said.

He said we have agreed to accommodate five thousand Yatrees on daily basis and if there is more capacity we will accommodate them.

Dr Faisal said roads and a reception center have been built in the area. He said a huge Gurdwara has been built which is being described as the biggest in the world.

The FO spokesperson said the signing of the agreement, despite many challenges indicates the resolve of the Prime Minister to fulfill his commitment in line with the Islamic principles for respect of all religions and government's policy to promote interfaith harmony.

Dr Mohammad Faisal said Prime Minister Imran Khan will perform the inauguration of the corridor on the 9th of next month and in this regard a big ceremony will also be arranged.

The DG Asia and SAARC said it was difficult and tough negotiations with India given the history tense relations with the country.

Responding to a question, the Director General South Asia and SAARC said that Sikh pilgrims from other countries including Canada and European will also be facilitated to visit their sacred places in Pakistan. He said elaborate security arrangements have also been put in place for the Yatrees.

Responding another question regarding Kashmir dispute, Dr Mohammad Faisal said there is no change whatsoever in Pakistan's position on the festering dispute.

While there have been several agreements between the two sides, very few have been signed by them. In 1974, a Bilateral Agreement on Protocol on Visits to Religious Shrines was signed.

The Indian government had conveyed its willingness to sign the Kartarpur Corridor agreement, three weeks ahead of the 550th birth anniversary of Guru Nanak.

On November 9, the corridor will be inaugurated ahead of Guru Nanak Sahib’s 550th birth anniversary on November 12.

The shrine is about four km from the border. The crossing and corridor, including a road, bridge over the Ravi River and immigration office, will replace a drawn-out visa process and circuitous journey through Pakistan.