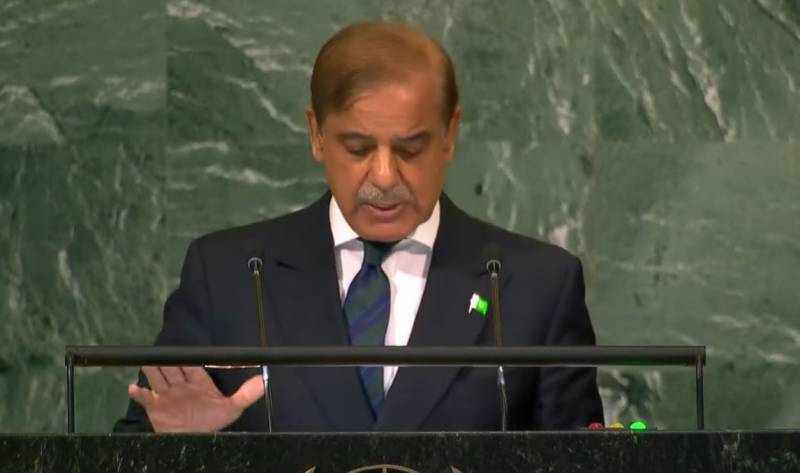 New York (Web Desk/Agencies): Prime Minister Shehbaz Sharif has urged the world leaders to come together and “act now” to deal with the issue of climate change.

In his address to the 77th session of United Nations General Assembly (UNGA) in New York on Friday, the premier said we expect some approximation of justice for the loss and damage by this calamity that has not been triggered by anything we have done.

"Due to this global challenge, our glaciers are melting fast, our forests are burning, and our heat waves have crossed 53 degree C, making us the hottest place on the planet," PM Shehbaz said.

"During the recent calamity, for 40 days and 40 nights a biblical flood poured down on us, smashing centuries of weather records, challenging everything we knew about disaster, and how to manage it," he added.

PM Shehbaz said that this calamity has pushed some 11 million people below the poverty line, while others will drift to cramped urban shelters, leaving little room for climate-smart rebuilding.

"Even today, huge swathes of the country are still under-water, submerged in an ocean of human suffering. In this ground zero of climate change, 33 million people, including women and children are now at high risk from health hazards, with 650,000 women giving birth in makeshift tarpaulins," the premier noted.

PM Shehbaz said that the devastating floods in Pakistan claimed more than 1500 lives, including over 400 children.

PM Shehbaz told the world that Pakistan has never seen a more stark and devastating example of the impact of Global Warming.

He said as the Secretary General Antonio Guterres so candidly said, hotspots like Pakistan fall in the ten most climate-vulnerable list of countries, but emit less than one percent of the greenhouse gasses that are burning our planet.

"It is therefore, entirely reasonable to expect some approximation of justice for this loss and damage, not to mention building back better with resilience," he said.

“At this point, I want to thank each and every one of the countries that have sent help, and their representatives to Pakistan to stand in solidarity with us in our most trying hour. On behalf of my nation, I once again express my sincerest appreciation to all of them,” he added.

The premier said as the impacts on the health and wealth of his country were beyond calculation at this point, his real worry, was about the next stage of this challenge.

"When the cameras leave, and the story just shifts away to conflicts like the Ukraine, my question is, will we be left alone, to cope with a crisis we did not create?", he questioned.

'Where and how do we begin, to rehabilitate and reconstruct, after the rescue and relief effort which is still going on for 12 long weeks?  For many of the lives we have saved, the future is dimmed by new fragility, lost homes, decimated livelihoods, deluged croplands, permanent food insecurity and exposure to uncertain futures,” the Prime Minister remarked.

"Some 11 million people will be pushed further below the poverty line, while others will drift to cramped urban shelters, leaving little room for climate-smart rebuilding," he added.

PM Shehbaz said for now, we have mobilised all available resources towards the national relief effort, and repurposed all budget priorities including development funds, to the rescue and first-order needs of millions.

He told the UNGA that cash transfers to the most affected, 4 million women heads of household, had begun weeks ago via their social security program, the Benazir Income Support Program, amounting to 70 billion rupees, (over $300 million).

“But at this point, the gap between our urgent needs and available resources is amplified by the sheer, unprecedented scale of the disaster. Our manpower and resources are totally overwhelmed,” he added.

PM Shehbaz said that he is fully committed to fighting this battle for our survival, in the tents and trenches with my people, until we have rebuilt Pakistan to face the growing challenges of this century.

He said that Pakistan's urgent priority right now is to ensure rapid economic growth and lift millions out of destitution and hunger.

"To enable any such policy momentum, Pakistan needs a stable external environment and we look for peace with all our neighbours, including India," the premier said.

Talking about Kashmir issue, PM Shehbaz said that sustainable peace and stability in South Asia, however, remains contingent upon a just and lasting solution of the Jammu and Kashmir dispute.

He said India's illegal and unilateral actions of August 5, 2019, to change the internationally recognised disputed status of Jammu and Kashmir and to alter the demographic structure of the occupied territory further undermined the prospects of peace and inflamed regional tensions.

"India's relentless campaign of repression against Kashmiris has continued to grow in scale and intensity. In pursuit of this heinous goal New Delhi has ramped up its military deployments in occupied Jammu and Kashmir to 900,000 troops, thus making it the most militarized zone in the world," PM Shehbaz said.

In a classic settler-colonial project, India is seeking to turn the Muslim-majority Jammu and Kashmir into a Hindu-majority territory, through illegal demographic changes. Millions of fake domicile certificates have been issued to non-Kashmiris, Kashmiri land and properties are being seized and electoral districts have been Jerry Mandered. Over 2.5 million non-Kashmiri illegal voters fraudulently registered.

PM Shehbaz said that all this is in blatant violation of UN Security Council resolutions and international law, particularly the 4th Geneva Convention.

"For our part, the Pakistani people have always stood by our Kashmiri brothers and sisters in complete solidarity, and will continue to do so until their right to self-determination is fully realised in accordance with the relevant UN Security Council resolutions" the premier remarked.

PM Shehbaz expressed hope that this world body and the Secretary-General will play their rightful role in urging India to implement the long pending UN resolutions.

Speaking about Afghanistan’s issue, PM Shehbaz said that Afghanistan today presents a unique challenge as 30 million Afghans are left without a functional economy and banking system that allows ordinary Afghans to make a living to be able to build a better future.

"Pakistan would also like to see an Afghanistan which is at peace with itself and the world, and which respects and nurtures all its citizens, without regard to gender, ethnicity and religion," he said.

The premier said that Pakistan is working to encourage respect for the rights of Afghan girls and women to education and work. Yet, at this point, isolating the Afghan Interim Government could aggravate the suffering of the Afghan people, who are already destitute.

"A peaceful, prosperous and connected Afghanistan is in our collective interest. As a neighbour, Pakistan has a vital stake in peace and stability in Afghanistan," he said.

"We must avoid another civil war, rising terrorism, drug trafficking or new refugees, which none of Afghanistan’s neighbors are in a position to accommodate," he said and urged the international community to respond in a positive way to the UN Secretary-General’s appeal for $4.2 billion in humanitarian and economic assistance to Afghanistan; release Afghanistan’s financial reserves, essential to revive its banking system.

About Pakistan’s sacrifices in the fight against terrorism, PM Shehbaz said that Pakistan strongly condemns terrorism in all its forms and manifestations. Terrorism does not have a religion. It is based on dogma, fuelled by poverty, deprivation, injustice and ignorance, and fanned by vested interests.

Calling Pakistan a “principal victim of terrorism” he said over last two decades, the country had suffered more than 80,000 casualties and over $150 billion in economic losses due to terrorist attacks.

He said Pakistan’s armed forces, with the support of its people, had broken the back of terrorism within Pakistan.

He said Pakistan yet continued to suffer terrorist attacks from across our borders, sponsored and financed by its regional adversary but the country was determined to defeat such cross-border terrorism.

Calling Islamophobia a global phenomenon, the prime minister told the General Assembly that since 9/11, suspicion and fear of Muslims and discrimination against them had escalated to epidemic proportions.

He said officially sponsored campaign of oppression against India’s over 200 million Muslims was the worst manifestation of Islamophobia who were subjected to discriminatory laws and policies, Hijab bans, attacks on mosques, and lynchings by Hindu mobs.

"I am particularly concerned by the calls for ‘genocide’ against India’s Muslims by some extremist groups," he remarked.

Reiterating Pakistan’s deep concerns over the numerous conflicts across the Middle East, including in Syria and Yemen, the prime minister said Pakistan supported all possible efforts to promote their peaceful resolution.

"We call on Israel to put an immediate end to the blatant use of force and flagrant violations of human rights of the Palestinian people and the repeated desecration of the Holy Al Aqsa mosque," he stated.

PM Shehbaz said that the only just, comprehensive and lasting solution of the Palestinian question was the acceptance of a viable, independent and contiguous Palestinian State, with the pre-1967 borders, and Al-Quds Al-Sharif as its capital.

He said Security Council and the General Assembly must be empowered to play their respective roles under the UN Charter.

The prime minister said the Security Council must be expanded by adding 11 new non-permanent members to make it more representative, democratic, transparent, effective and accountable.

"Adding new permanent members will paralyze the Council's decision-making, enlarge its representational deficit, and create new centres of privilege in violation of the principle of sovereign equality of Member States," he said.

About Pakistan’s peace efforts in the region, PM Shehbaz said that Pakistan is a partner for peace and we will work with all those committed to the UN Charter's principles to restore the vision which created the United Nations and to equip this Organisation with the capacity to preserve global peace and promote universal prosperity.