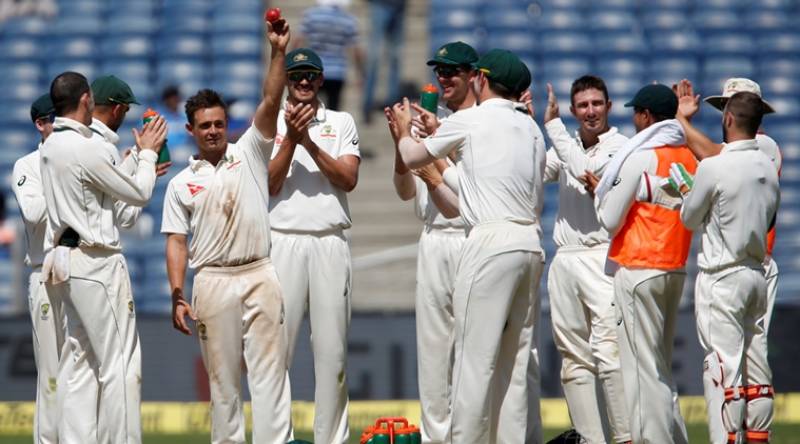 Pune (Reuters): Left-arm spinner Steve O’Keefe picked up 12 wickets to guide Australia to a first win in India since 2004, the 333-run thrashing in the opening Test also bringing the home side’s 19-match unbeaten streak to a juddering halt on Saturday.

The 32-year-old, who returned matching career-best figures of 6-35 in both innings for a maiden 10-wicket Test haul, shone with the ball after his skipper Steve Smith had recorded his first Test century on Indian soil to anchor Australia’s batting. India, who had not lost a home Test in 20 matches since a 2012 defeat to England in Kolkata, were once again unable to cope with O’Keefe’s probing lines after they were bundled out for a paltry 105 in the first innings.

Chasing a massive victory target of 441, India scored just two more runs in their second innings to capitulate inside three days at the Maharashtra Cricket Association Stadium, making its debut as a Test centre. “We’ve got to hold our heads high, take it on the chin and accept the defeat, they completely outplayed us,” said home captain Virat Kohli after India fell 1-0 behind in the four-match series.

“That was probably our worst batting display in the last two years. I’m sure the guys will bounce back strongly but the batting was more disappointing than the bowling,” he added. Arriving in India on the back of nine straight defeats in Asia, Australia were in control of the contest once they scraped together 260 in the first innings and tasted victory in India for the first time since a 342-run Nagpur victory in 2004.

“I’m really proud of the way the boys have performed in this Test match,” said Australia captain Smith. “Steve O’Keefe was absolutely outstanding throughout. I think it’s been 4,502 days since Australia’s won a Test here in India. I know it to the day and I’m really proud of that achievement.”

Four of O’Keefe’s six wickets in the second innings were leg before dismissals while he also got the prized scalp of Kohli, who completed a forgettable display when he shouldered arms to a straight delivery and saw his off-stump uprooted for 13. Spin colleague Nathan Lyon provided able support, picking up the other four wickets in India’s innings for 53 runs.