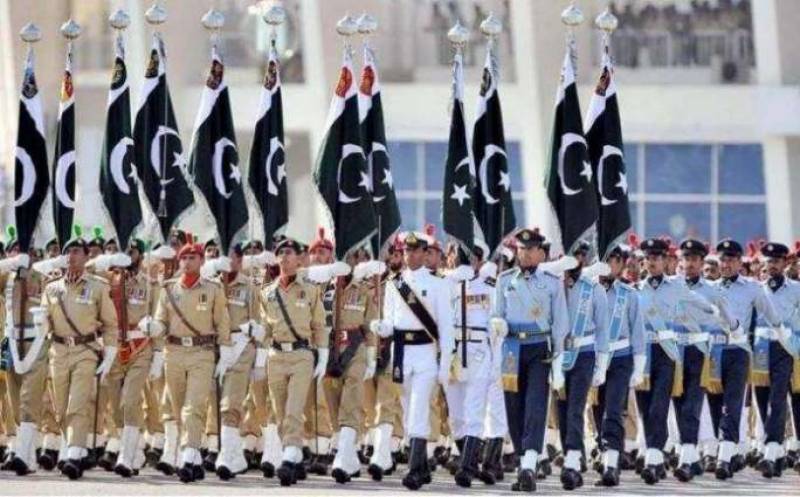 Islamabad (Web Desk): The three wings of the armed forces displayed their professionalism and military prowess at the spectacular Pakistan Day Military Parade held at the Parade Avenue in Islamabad on Thursday.

Formations of fighter jets including F-16, JF 17, Mirage, AWACs. C-130 and P-3C Orion participated in the fly past, the Radio Pakistan reported.

Mechanized columns including tanks, armored personnel carriers, rocket launchers, air defense system, Radars, indigenously built UAVs and short and long range missiles Ra'ad, Nasr, Babr, Ghaznavi and Shaheen were showcased on the occasion. Engineering corps presented its state of the art equipment. This was followed by the fly past of helicopters.

Amidst applause by the audience, JF-17 and formations of Sherdils presented breathtaking aerobatics spreading range of colors in the skies.

As a mark of strong bonds between Pakistan and Turkey, a Turkish fighter jet presented a whole range of dazzling maneuvers. A Turkish military band on the occasion presented different tunes including that of  Dil Dil Pakistan, Jaan Jaan Pakistan.

Floats depicted culture of Jammu and Kashmir, Gilgit Baltistan and the four provinces.  The floats of ministry of science and technology and the frontline healthcare workers against Covid-19 were also part of the parade. Dhol Party presented different colors of the country's diverse culture.

The key divers of the forces including the paratroopers of Bahrain, Iraq, Palestine, Sri Lanka and Turkey exhibited free fall, carrying national flags and those of services.

President Dr Arif Alvi later visited an enclosure and met with those personalities who have made outstanding contributions in different fields.

Different national songs were also presented on the occasion from the float of the Inter Services Public Relations (ISPR).

The mega event, organised as per the Covid related Standard Operating Procedures (SOPs), was attended amongst others by the federal ministers, parliamentarians, the Chairman Joint Chiefs of Staff Committee (CJCSC) and the three services chiefs.