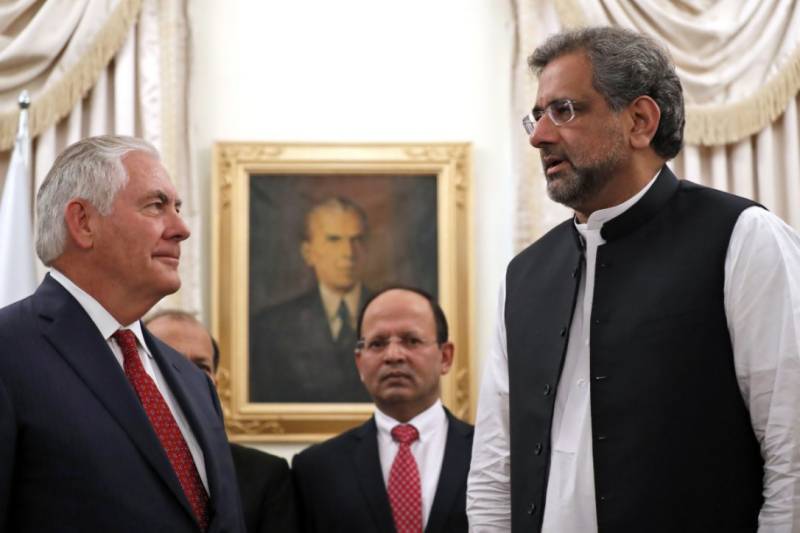 Islamabad (Web Desk): United State Secretary of State Rex Tillerson said on Tuesday, that Pakistan is important regionally to the joint Pak-US goal of providing peace and security in the region.

US secretary of state passed the statement during a meeting between Prime Minister Shahid Khaqan Abbasi and other high-ranking Pakistani officials during Tillerson's tour to South Asia and the Gulf region.

Tillerson said, "Pakistan is important regionally to our joint goals of providing peace and security to the region and providing an opportunity for greater economic relationship."

Abbasi said that the country is committed in the war on terror and the country is looking forward to moving ahead with the US and building a tremendous relationship.

Abbasi said, “The US can rest assured that we are strategic partners in the war against terror and that today Pakistan is fighting the largest war in the world against terror.”

The US Embassy, in a statement released, said the secretary of state reiterated President Trump’s message that Pakistan must increase its efforts to “eradicate militants and terrorists operating within the country”.

“The Secretary outlined the United States’ new South Asia Strategy and the vital role that Pakistan can play in working with the United States and others to facilitate a peace process in Afghanistan that can bring stability and security to the region,” said the statement from the US embassy.

During the meeting, Tillerson also expressed appreciation for Pakistan’s sacrifices in the fight against terrorism.

“The Secretary also expressed his gratitude to the Government of Pakistan and the Pakistani Army for their cooperation in securing the release of the Boyle-Coleman family from captivity,” added the statement.

Other matters of mutual interest, including the war on terror, were also discussed during the meeting, reported Geo News.

On Monday, Tillerson met Afghan President Ashraf Ghani at the Bagram Airbase after he landed in Afghanistan on a surprise visit.

Addressing the media there, Tillerson said he will pressure Islamabad to take action on the support Taliban and other "terrorist organisations" receive in the country.

Islamabad needed to "take a clear-eyed view of the situation that they are confronted with in terms of the number of terrorist organisations that find safe haven inside" the country, he told reporters, according to a pool report.

"We want to work closely (with) Pakistan to create a more stable and secure Pakistan as well," Tillerson said.

This was Tillerson's first trip to Afghanistan as secretary of state and comes several weeks after US Defence Secretary Jim Mattis also paid an unannounced visit.

US President Donald Trump "has declared that we are here to stay until we can secure a process of reconciliation and peace", Tillerson said, adding: "It's not an unlimited commitment."

Tillerson's unannounced visit follows one of the bloodiest weeks in Afghanistan in recent memory, with more than 200 people killed in multiple attacks on security installations and mosques across the country.

Tillerson headed to Iraq after Afghanistan visit, after which he arrived in Pakistan. He has earlier visited Saudi Arabia and Qatar as part of his regional tour.

The US secretary of state will now head to New Delhi and then Switzerland.