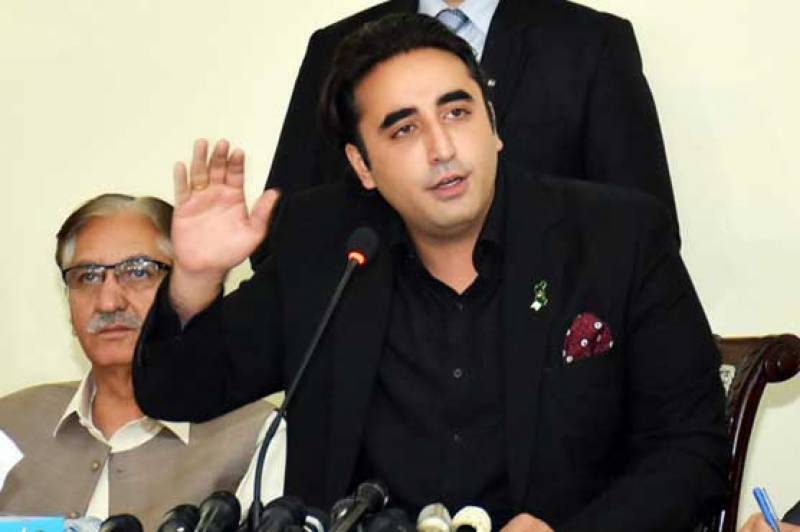 Karachi (Web Desk): Pakistan Peoples Party (PPP) Chairman Bilawal Bhutto-Zardari on Saturday said that there will be no need for opposition’s protest and no-confidence motion if Prime Minister Imran Khan steps down himself.

Addressing a press conference in Karachi, the PPP chief said that his party has decided to launch a "democratic attack" against the government and urged the other opposition parties to adopt a unified stance of ousting the incumbent PTI-led administration.

He ruled out opting for undemocratic tactics to achieve the goal of dismissing the government.

Bilawal said that PPP is ready to back Pakistan Muslim League-Nawaz's (PML-N) candidate for the prime minister's slot if the Opposition is able to oust the incumbent government.

In a democracy, anyone having the majority can decide who becomes the next prime minister.

"PML-N clearly has the majority; PPP and other opposition parties are ready to sacrifice the prime minister's seat for them," the PPP chairman said, stressing the major stakeholder should announce its candidate for the office.

Chairman PPP said that he appeals to all the parties, including the MQM and GDA, which have formed this government to keep their ministry on one side and the issues facing the people on the other. I have asked the Chief Minister to talk to the MQM and GDA, because we believe in dialogue.

Bilawal also advised PTI's allies, especially the MQM-P, to join hands with the anti-government movement as the PPP is all set to begin its "awami march" tomorrow, from Karachi to Islamabad.

Speaking about PTI’s Sindh Huqooq March, Bilawal said that the PTI leaders say that they have come out for the rights of the people of the province and hence, kick-started their march from Ghotki; however, they are the ones who did not give the farmers their due share of urea.

“The people of Sindh will respond accordingly,” he said.

Terming the march as a “political circus” he said that PPP has no threat from “a group of political orphans” gathered in Sindh.

In response to another question, he said that we have never asked the workers to take down the flag of any party.

Due to the hard work of the jiyalas, the party has become stronger all over Karachi including Central District.