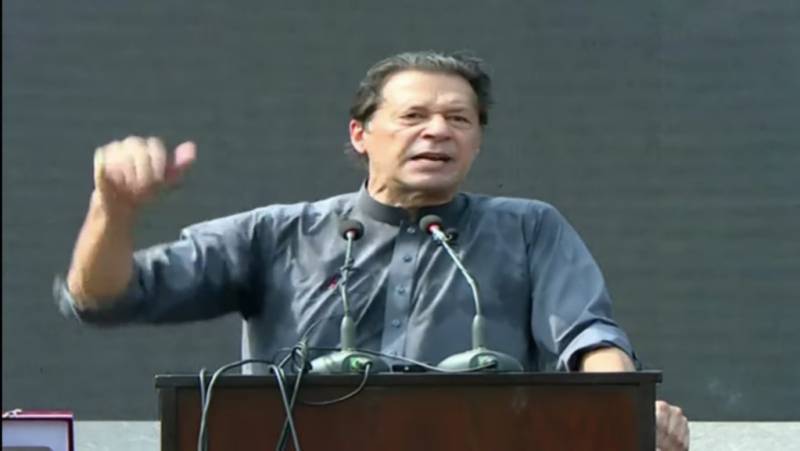 Addressing a gathering at Government College University Lahore, the PTI chief said that after surfacing of new audio leaks it has been proven that CEC Sikandar Sultan Raja was house-servant of Sharif family.

Criticising Pakistan Muslim League-Nawaz (PM-N) suprmeo Nawaz Sharif, Imran Khan said that in the audio leaks Pakistan Nawaz is telling CEC who should be disqualified and when to hold elections.

"If he [CEC] had any shame, he would resign,” taunted Imran, “but he has no shame. That is why we will have to get him to resign," the PTI chief said.

The former premier said that in the coming days, there would be more “episodes” in audio leaks saga.

"I am hearing that an audio recording will surface where Maryam will tell her abba jee [Nawaz] that the election commission has said they will disqualify Imran Khan in the Toshakhana case and that there is no need to worry," Khan said.

While criticising Maryam, the PTI chief referred to one of the audio recordings purportedly featuring a conversation between PM Shehbaz and an unidentified official about the possibility of facilitating the import of Indian machinery for a power project that was linked to the PML-N vice president’s son-in-law.

"How was the machinery imported from India despite the ban on trade? Maryam is a princess above the law who can do whatever she wants.

It is pertinent to mention that audio recordings of purported conversations between key government figures, including Prime Minister Shehbaz Sharif, PML-N vice president Maryam Nawaz and some federal cabinet members, discussing governance matters privately surfaced over the weekend, prompting concerns over the security of the Prime Minister’s Office (PMO).

The audios drew sharp criticism from the opposition, which expressed concerns over the security of the PMO. However, several government ministers had insisted that the audios pointed to no wrongdoing.