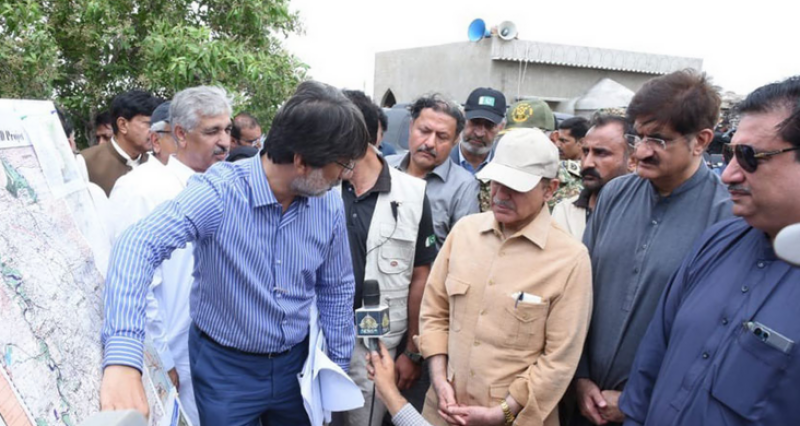 Sajawal (Web Desk): Prime Minister Shehbaz Sharif on Saturday said that a collective policy will be framed in collaboration with the provinces for the relief and rehabilitation of flood affected people.

The premier made the remarks during a visit to Sujawal district of Sindh province where representatives of concerned departments briefed him about the devastation caused by the calamity.

During a visit to review rescue and relief operations in flood-hit areas of Faqirani Jat, Oplano and others, the prime minister was given a detailed briefing over the situation and the relief efforts.

Speaking on the occasion, PM Shehbaz said that he had witnessed the vast area which was inundated by flood water.

He said that the entire country was badly affected with flash floods due to incessant monsoon rains, and resolved to overcome the challenge with collective efforts.

The prime minister said that the heavy downpours in the season had caused human losses, damaged road and links infrastructure across Khyber Pakhtunkhwa, Punjab, Sindh and Balochistan.

"In Swat and Kalam, flash floods had caused human and financial losses, swept away road infrastructure and bridges, and now headed towards Charsadda and Nowshehra posing a severe threat there", PM Shehbaz said, adding that the district administrations, rescue agencies and the armed forces had been fully supporting the rescue and relief efforts and evacuating the people to safe places.

The prime minister said that the floods have also damaged the structure of Munda Dam.

The prime minister said in the flood affected areas, rescue and relief efforts were being carried out.

"Unfortunately, huge losses have been witnessed across the country, but with joint and continuous efforts, the government will overcome the issues posed by the natural catastrophe," PM Shehbaz said.

The prime minister also appreciated the efforts of the Sindh CM, administration and the armed forces for their rescue and relief operations in these areas.