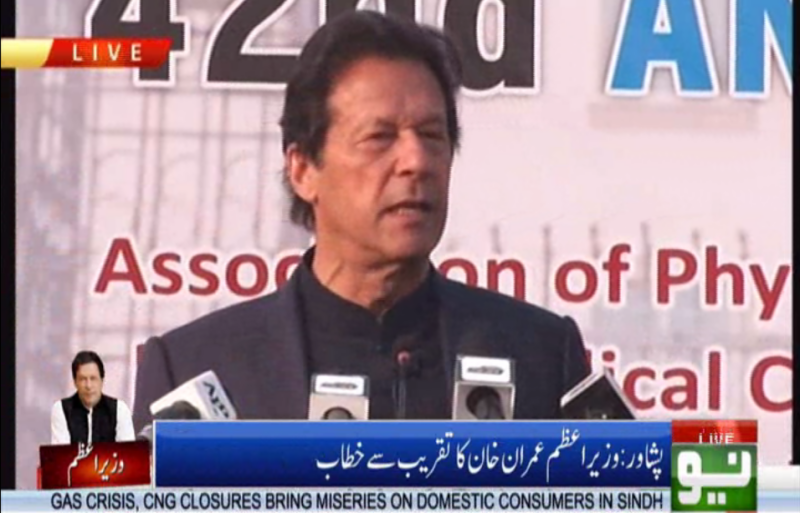 Addressing a gathering of the members of Association of Physicians of Pakistani Descent of North America (APPNA) at Peshawar’s Khyber Medical College, the prime minister urged them to raise their voice for Muslims "suffering in Kashmir and India at the hands of the RSS-led BJP government".

The PM said that APPNA is the most powerful and influential Pakistani group overseas. "You are the most educated, with the most awareness."

"India's lobby in America right now is far more powerful than Pakistan's. India's point of view always overshadows that of Pakistan and American policies for Pakistan are affected by that viewpoint," he explained.

PM Imran warned of India undertaking a false-flag operation in Azad Kashmir to draw attention away from their actions which had for the first time been met with international criticism.

He urged the body to begin raising its voice because the "situation in India will further deteriorate".

The PM said that the Pakistan government has been trying to raise awareness in America on this, however, the APPNA group will prove instrumental in furthering the cause. He urged the APPNA to utilise its lobbying power.

Khan told the overseas Pakistanis that he understands the problems being faced by them.

The premier also hit back at critics for alleging that "the government is trying to privatise the health sector."

"The government is facing hurdles in implementing reforms in all sectors including bringing automation in FBR and tax collection, however, we will defeat these mafias," Khan said.

The prime minister said that there is a lot of talent in overseas Pakistanis and the government is creating conducive environment for them to invest in the country.