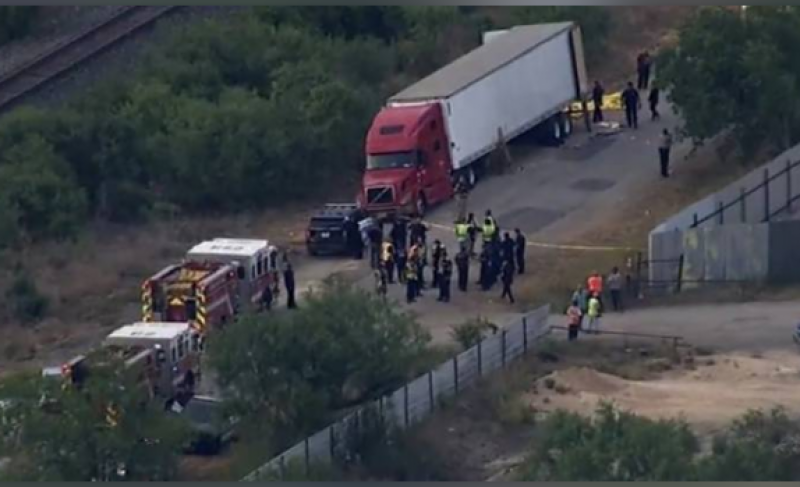 San Antonio (Agencies): At least 46 migrants were found dead Monday in and around a truck that was abandoned on the side of a road in San Antonio, in central Texas.

The grim discovery was one of the worst disasters involving migrants in the United States (US) in recent years, and came five years after a similar deadly incident in the same city, a few hours from the Mexican border.

"At this time we have processed approximately 46 bodies that have been triaged and tagged and declared deceased," San Antonio Fire Chief Charles Hood told reporters.

He said that 16 people had been transported to hospital alive and conscious, including 12 adults and four pediatric patients.

"The patients that we saw were hot to the touch, they were suffering from heat stroke, heat exhaustion, no signs of water in the vehicle, it was a refrigerated tractor-trailer but there was no visible working AC unit on that rig," Hood said.

Officials reported three people were in custody over the incident.

San Antonio, which lies some 250 kilometers (150 miles) from the border, is a major transit route for people smugglers.

The vehicle was found on a road near Highway I-35, a major US artery that stretches all the way to the border with Mexico.

A massive emergency operation was underway at the scene involving police, firefighters and ambulances.

Texas Governor Greg Abbott, a Republican who advocates a tough line on immigration, hit out at President Joe Biden over the disaster, blaming his "deadly open border policies."

"These deaths are on Biden," Abbott tweeted. "They show the deadly consequences of his refusal to enforce the law."

San Antonio was the site of a similar migrant tragedy in 2017, when 10 people suffocated to death in a sweltering trailer with broken air conditioning and clogged ventilation holes as they traveled into the US.