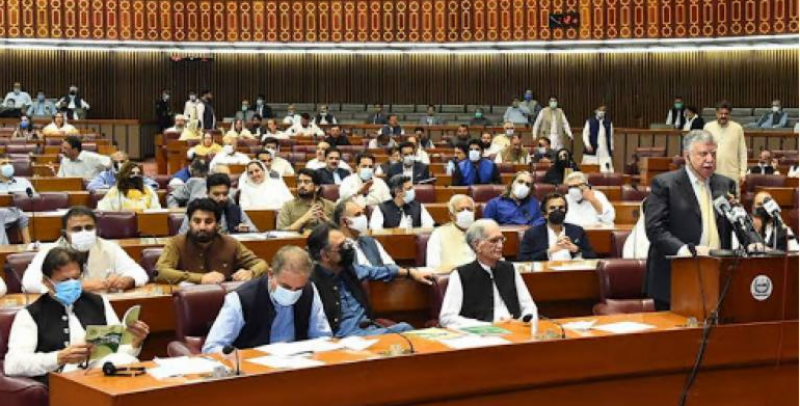 Finance Minister Shaukat Tarin presented the bill. The amendments proposed by the opposition in the finance bill were rejected by the House.

Having a total outlay of Rs8,487 billion, the budget 2021-22 envisages incentives and measures for various sectors to promote business activities and provide relief to the general public, the Radio Pakistan reported.

The federal employees have been granted 10% ad hoc relief besides 10% increase in pensions. The minimum wage has been enhanced to Rs20,000 per month.

The annual public sector development program (PSDP) has been increased by 40% from Rs630 billion to Rs900 billion whereas Rs100 billion have been earmarked for construction of hydro power dams including Dasu, Diamer Basha, Mohmand and Neelum Jhelum.

The growth target of 4.8% has been set for the next fiscal year with tax collection target of Rs5829 billion.

Allocation for Ehsaas program has been enhanced from Rs210 billion to Rs260 billion for the next fiscal year.

An amount of Rs682 billion has been earmarked for subsidies which were Rs430 billion during the outgoing fiscal year.

The budget provides zero rating to export of IT services. Tax relief has been given for locally manufactured cars up to 1000CC whilst various tax exemptions and concessions have also been given to encourage the manufacturing of electric vehicles in the country.

An amount of Rs66 billion has been allocated for the Higher Education Commission (HEC) and Rs10 billion for Kamyab Jawan Program.

The budget also envisages allocation of $1.1 billion dollars for procurement of anti-covid vaccine.