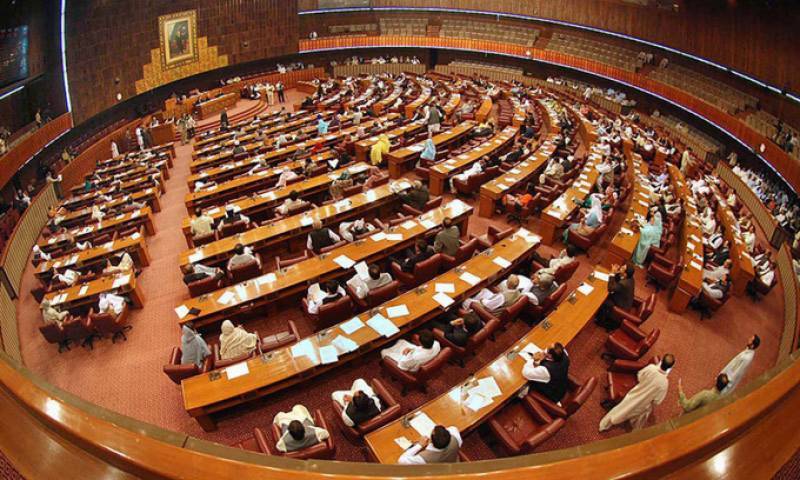 Islamabad (Web Desk/Agencies): The National Assembly on Wednesday passed the Finance Bill 2022-23, giving legal effect to budgetary proposals for the next fiscal year.

Minister of State for Finance and Revenue Aisha Ghaus Pasha moved the motion for consideration of the Finance Bill, 2022 to give effect to the financial proposals of the federal government for the year beginning on July 1, 2022.

The passage of the budget for the fiscal year 2022-2023 brings the government one step closer to the revival of the stalled International Monetary Fund (IMF) programme.

On June 10, Finance Minister Miftah Ismail had presented the budget with an outlay of Rs9.5 trillion, the government had avoided taking unpopular tax measures for fear of political backlash.

However, the government slowly had to roll back several relief measures after the IMF asked Islamabad to take practical measures to stabilise the economy.

The formal debate started on June 13, 2022 that continued till June 24, 2022. The House also discussed recommendations of the Senate and three MNAs expressed their views on it.

Minister for Finance Miftah Ismail had concluded debate on Finance Bill on June 24, 2022.

The House held discussion on the Charged Expenditure included in Demands for Grants and Appropriations for the financial year ending on June 30, 2023.

The NA approved 131 demands for grants related to various departments and ministries.

The total volume of the federal budget for fiscal year 2022-23 is Rs9.5 trillion with allocation of Rs 2,158 billion under the Public Sector Development Programme (PSDP) which is one per cent up from Rs 2,135 billion last year.

The Ministry of Finance has termed the budget 2022-23 as growth budget and it is based on a well-thought-out strategy to boost the economic growth outlined in the medium-term budgetary strategy paper for FY23 to FY25.

It gives a clear roadmap of the strategic priorities, revenue and spending policies of the government.

During the debate on the Finance Bill, Aisha Ghaus Pasha said there had been no pressure from International Monetary Fund (IMF) to integrate amendments in the federal budget 2022-23 saying that the changes had been made in larger interest of the country.

The amendments were made in such a way that the common man should not be affected, she said adding that the government had reduced taxes on the people having small incomes while increased tax on the higher income people.

She said the previous government agreed on some amendments with IMF that were being followed due to commitment of the state with the international monetary institution.

The state minister said that super tax was being levied on the rich industrialists while small income segments had been given relief.

Last week, Prime Minister Shehbaz Sharif had also announced a 10 per cent “super tax” on 13 large industries to raise an additional Rs465 billion in revenue, in an attempt to trim the budget deficit.

The  industries to be taxed include cement, steel, sugar, oil and gas, fertilisers, LNG terminals, textile, banking, automobile, cigarettes, beverages, chemicals and airlines. High net worth individuals and companies will also be subject to a "poverty alleviation tax".

Finance Minister Miftah Ismail also announced these measures during his address to the NA the same day in a session convened to wind up the budget debate and elaborated that both these taxes were a "one-time tax" for the fiscal year 2022-23.

The minister told the NA that a new fixed tax scheme on shops outside of the tax net to reduce the budget deficit.