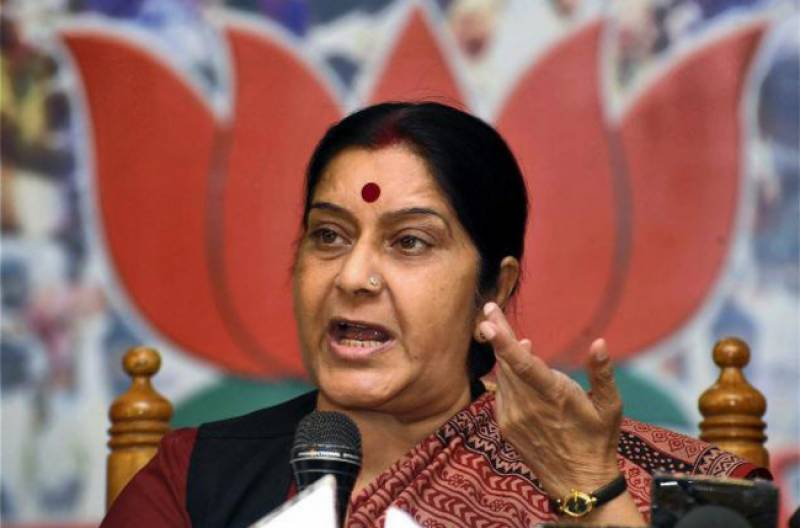 New Delhi (Web Desk): Indian Foreign Minister Sushma Swaraj on Monday, said that the high number of “cross-border firings by Pakistan” does not set the tone for engagements such as a cricket series, according to Times of India.

She said this at a meeting of the consultative committee attached to the Indian ministry that offered a review of relations with neighbours.

Responding to a query whether restarting the long-suspended cricket exchange could be an option for easing tensions between the two countries, Swaraj said there had been suggestions on humanitarian lines such as the release of women and elderly detainees and prisoners.

The India-Pakistan cricket fixture has been off the international calendar for a while now and the poor state of bilateral ties do not seem to allow a change in stance as yet though the two nations continue to compete in international competitions where the teams play one another.

Pakistan has visited India twice without India playing the reciprocal series. In the normal course, India and Pakistan would play at least one bilateral series and also smaller limited format engagements in case of smaller windows being available.

The most recent issue between the two countries has been the meeting arranged by government authorities, of the Indian spy Kulbhushan Jadhav with his wife and mother. India has been blaming Pakistan for allegedly “insulting” the two women who met Jadhav in the Pakistan foreign ministry office in Islamabad as they were asked to remove their mangalsutras, bindis and bangles.

The Foreign Office on Tuesday categorically rejected claims by the Indian media that the Indian forces crossed the Line of Control to attack Pakistani troops. “The false claims by India about the alleged cross-LoC adventures are a figment of their imagination and counter-productive for peace and tranquillity on the Line of Control,” the statement said.

The Indian side had received a befitting response from the Pakistani forces and their guns were silenced, it said. FO Spokesperson Dr Mohammad Faisal summoned the Indian envoy and urged his side to respect the 2003 ceasefire agreement.

The Inter-Services Public Relations (ISPR) also denied Indian claims that their troops had crossed over the Line of Control. “No Indian soldier crossed over Line of Control,” the statement read. “Indian media claim is a continuation of their self-defeating projections to satisfy the domestic audience.”