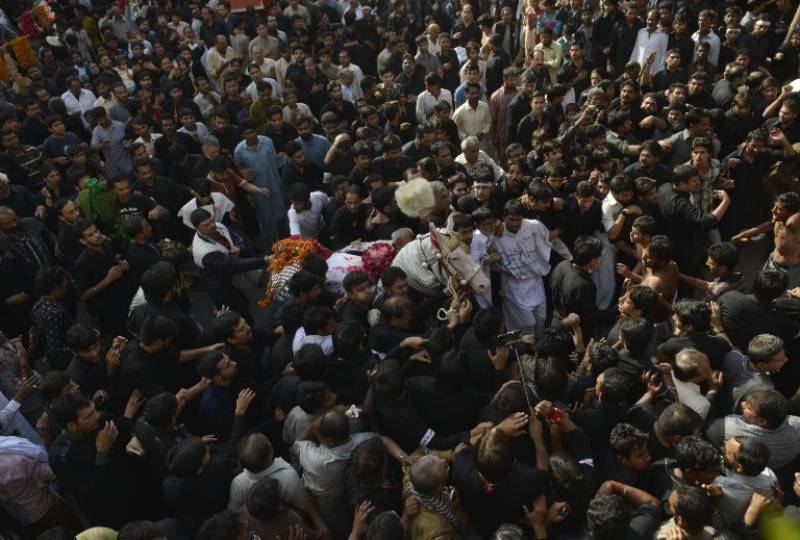 Lahore/Karachi (Staff Report): The Ashura, 10th Muharram, to pay homage to the supreme sacrifices rendered by Hazrat Imam Hussain (R.A) and his companions, observed with solemnity across Pakistan on Sunday (today) amid strict security.

The mourning processions were taken out in major and small cities amid sobs and tears to commemorate the holiest day of Islamic calendar.

The home department of Punjab declared Rawalpindi and Lahore the most sensitive cities in its security plan for Ashura, 10th Murharram and more than 146000 security personnel have been deployed for the day across the province.

Moreover, around 20000 security, FC and Rangers personnel performed their duties to maintain law and order situation.

Meanwhile, the motorcycle pillion riding banned in Karachi, Peshawar and Quetta whereas the metro bus in Islamabad and Rawalpindi also remained non-operational today.

In his message, the president said the country can get rid of all political and social issues like extremism by deciding the line of action keeping in view Imam Hussain's (RA) sacrifice.

He said while commemorating the sacrifices of Imam Hussain (RA) and his family members, we should keep in view his objectives and strategies, which provide a solution to the issues of humanity, particularly those confronting us.