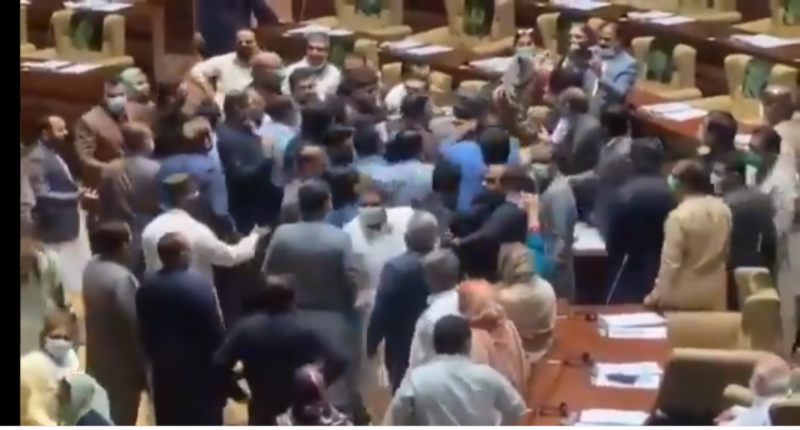 According to details, the three MPAs, Aslam Abro, Shehryar Shar and Karim Bakhsh Gabol, had earlier announced that they will vote as per their aspirations.

The party members started chanting as the rebel members entered the provincial assembly while MPAs of the Pakistan People’s Party (PPP) clapped on the entrance of three members.

After a brief argument, the PTI MPAs tried to take Gabol out at which point the PPP MPAs intervened in an attempt to resolve the matter.

However, the situation further escalated and led to a scuffle between the PTI and PPP lawmakers.

Following the scuffle, Gabol was escorted out of the assembly by PTI lawmakers, made to sit in a car and driven away.

Meanwhile, the other two dissident lawmakers remained on the PPP's side and exited the assembly with government members.

Speaking to media, Aslam Abro said he and two of his fellow MPAs have made it clear to everyone that they will not vote along the party lines.

He alleged that Senate tickets were sold and that they do not agree with the selection of Saifullah Abro and Faisal Vawda.

On Monday, PTI Sindh leader and MPA Khurrum Sher Zaman stated that three of his party members were kidnapped and they were no more in contact.