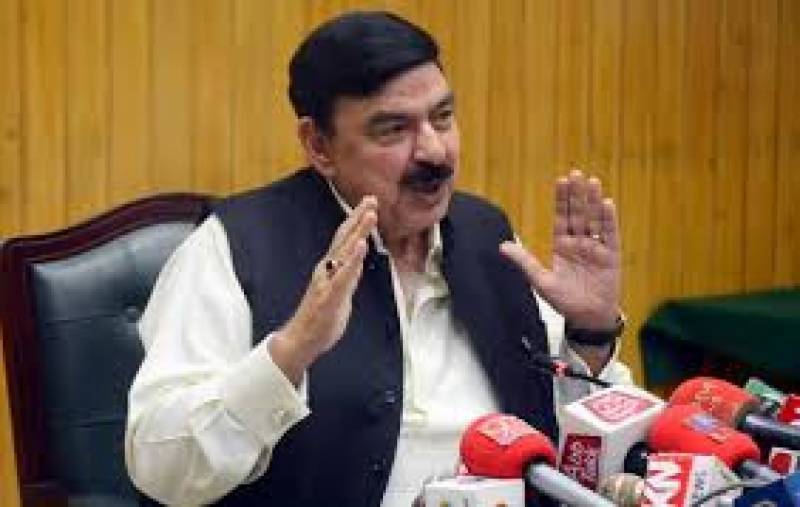 Karachi (Web Desk): Interior Minister Sheikh Rashid Ahmad on Saturday said that the peace talks will be held only with those who want to shun the path of violence and surrender.

Talking to media men in Karachi, he made it clear that nobody will be allowed to use Pakistan's land against any one, similarly any land used against Pakistan will not be tolerated.

He expressed the determination that enemies of Pakistan will be dealt with iron hands and terrorism will be eliminated from each and every corner of the country.

To a question he said that there will be no talks with enemies of the country, however talks could be held with those who will lay down arms and will be willing to follow the constitution of the country.

Meanwhile, Information Minister Fawad Chaudhry said on Saturday said people who want to abandon violence should be given a chance to return to normal life.

In a video message today, the information minister said the state of Pakistan had gone through an enormous ordeal as it sacrificed thousands of lives in the war against terrorism.

He said that about 3,000 people in Balochistan, who were a victim of Indian conspiracies, had now returned.

“Similarly, there are individuals in various splinter groups of TTP who wanted to honour their pledge of allegiance to the country,” Fawad said.

"The principle, which Prime Minister Imran Khan had put forth, is to bring back people, who were derailed from Pakistan, in the mainstream life in the purview of our Constitution and law," the minister added.

The ministers’ remarks came after Prime Minister Imran Khan on Friday said that his government was in talks with some factions of the banned Tehreek-e-Taliban Pakistan (TTP) for peace and reconciliation.

The reaction came after Prime Minister Imran Khan said that his government was holding disarmament talks with some factions of the proscribed Tehreek-e-Taliban Pakistan (TTP).

In an interview with TRT World, the premier said that some factions of the TTP want to talk to the government.

To a question regarding the talks, PM Imran said that the dialogues are about reconciliation process and if successful, will lead to the government "forgiving" them, "and then they become normal citizens".