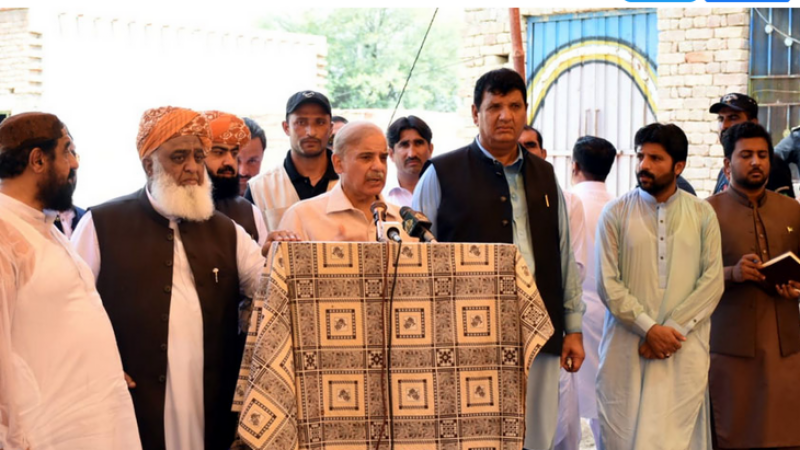 Tank (Agencies): Prime Minister Shehbaz Sharif on Thursday said that the collective efforts by federal and provincial governments and departments was inevitable to ensure early rehabilitation of the people affected by flash floods caused by torrential rains.

The prime minister, during his visit to the flood-affected areas of Tank district of opposition-led Khyber Pakhtunkhwa (KP), lauded the efforts of the National Disaster Management Authority (NDMA) and provincial disaster management authorities for striving to rescue and relief the affected population.

The prime minister also spoke high for the work by the NHA in Balochistan and in KP for rehabilitation of the flood-ravaged road infrastructure.

During the briefing, the prime minister was apprised of the ongoing relief and rehabilitation work in the area including supply of food, drinking water to the displaced people staying at temporary shelters.

The prime minister urged the KP government to enhance the compensation of existing Rs 0.8 million for the deceased to Rs1 million to bring it at par with that of the provincial government.

“Financial compensation is nothing (comparing the loss of their dear ones) but it will help them live through the challenges of life… This is not competition. This is complimentary. This is our responsibility,” he added.

The prime minister said that the federal government had increased the cash assistance for injured people from Rs25,000 to 250,000 and had also announced a similar compensation of Rs0.5 million for both mud and concrete houses damaged completely and Rs 0.2 million for partially hit ones.

Upon being told about the damage to the main roads by flood, the prime minister instructed the National Highway Authority (NHA) to rehabilitate the ones under its jurisdiction.

The premier said after completing the visits of flood-hit areas, he would mull over the surveys of the NDMA and provincial authorities to assess the damages and decide the possible contribution by the federal government.

Pakistan Democratic Movement (PDM) chief Mualana FazlurRehman, who also accompanied the prime minister, said the construction of Tank Zam dam and other small dams would help save the area and its infrastructure from the floods.

PM Shehbaz also lauded the NDMA, PDMAs and the ministers concerned for putting in their efforts to ensure early relief and rehabilitation of the affected people.

The prime minister also took a round of the shelter camps housing the flood-affected people.

He assured the displaced families that both the federal and provincial government were collectively working for their early rehabilitation.

Minister for Communications Asad Mahmood and Advisor Amir Muqam and senior government officers were also present on the occasion.