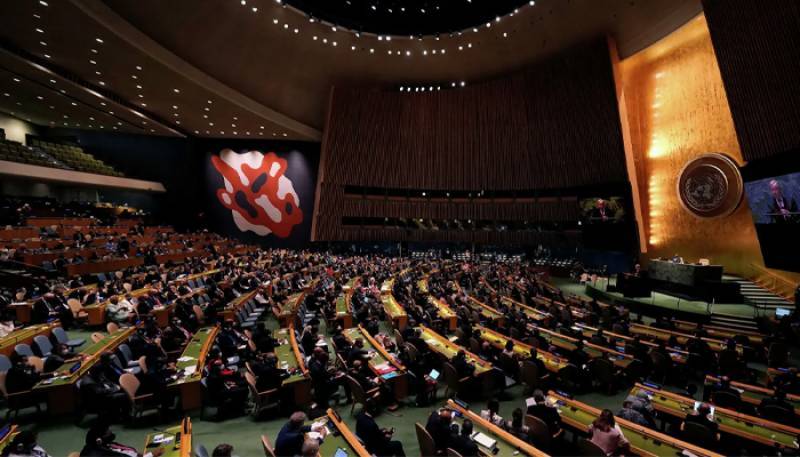 Geneva /Islamabad (Agencies): The United Nations (UN) on Tuesday launched a fresh appeal of over 800 million dollars for Pakistan on the basis of updated on ground need assessment of the flood situation in the country.

Addressing a briefing prior to main event held simultaneously in Geneva and Islamabad, UN Humanitarian Coordinator for Pakistan, Julien Harneis said that the UN has upscaled its humanitarian appeal for the flood affected people of Pakistan to $816 million from previous $160 million assistance, considering a multitude of rehabilitation and health -related issues, cropping up in the post flood situation.

"There will be an increase in child morbidity and it will be pretty terrible unless we act rapidly to support the government in increasing the provision of health, nutrition and water and sanitation services across the affected areas," international news outlet Reuters quoted the UN official as saying.

In her virtual address from Islamabad to the event on an upscale UN Flash Appeal for Pakistan floods held in Geneva, Minister of State for Foreign Affairs Hina Rabbani Khar called on the need for comprehensive future-based strategy to equip the people in Pakistan to survive devastation of floods.

"It is the collective responsibility of the world to provide assistance to the people badly affected by the country’s massive flash floods," the minister said.

She mentioned the 'resilience and endurance' of the people in the flood-hit areas and said that efforts needed to be converged on their rehabilitation.

Minister for Climate Change Sherry Rehman, while stressing upon immediate global help, said that Pakistan could not afford to spend more on recovering from devastating climate-induced floods.

She told the conference that the world was facing an accelerated global warming issue.

"It is becoming clear to all that this is the climate event of the century," the minister said.

"The scale of the catastrophe is more than existential. We are gathered here to reboot your compassion simply because the numbers are too staggering to serve any country alone," she maintained.

The minister pointed out that it was a real race against time for Pakistan.

"Winter is fast approaching, people are left at the mercy of open skies, about 7.9m are still scrambling for dry land," Sherry added.

Speaking on the occasion, Director General World Health Organisation (WHO) Tedros Adhanom Ghebreyesus told the meeting that Pakistan was on the verge of a public health disaster.

Under-Secretary General for Humanitarian Affairs and Emergency Relief Coordinator Martin Griffiths said that the people of Pakistan were the victims of global inaction to tackle issues emanating from climate changes.

The UN official stressed the need for supply of shelters and other essential household items to the families affected by floods in Pakistan.

The ministerial-level participation from the Government of Pakistan included Minister for Climate Change Senator Sherry Rehman, who attended the event in person in Geneva, whereas Minister for Planning, Development and Special Initiatives Professor Ahsan Iqbal, Minister for Economic Affairs Sardar Ayaz Sadiq, and Minister of State for Foreign Affairs Hina Rabbani Khar participated virtually from Islamabad.

The meeting was also attended by UN member states as well as various UN agencies and humanitarian organizations working in the area of disaster relief.

Earlier in a statement, the Foreign Office (FO) said that the Floods Response Plan had been prepared in close coordination between the government of Pakistan and the UN which focuses on providing necessary assistance to the vulnerable people affected by the unprecedented floods. It complemented the government’s overall response to the recent climate-induced floods in Pakistan.

As per the latest data and estimates, nearly 1,700 people had been killed in the floods triggered by heavy monsoon downpour. Millions had been displaced while the UN also raised alarm on the rise of water-borne diseases in the flood-hit population.

The government of Pakistan estimated the cost of the damage at $30 billion. Both the government and the UN have viewed the climate change as the main reason behind the befall of natural catastrophe on Pakistan.