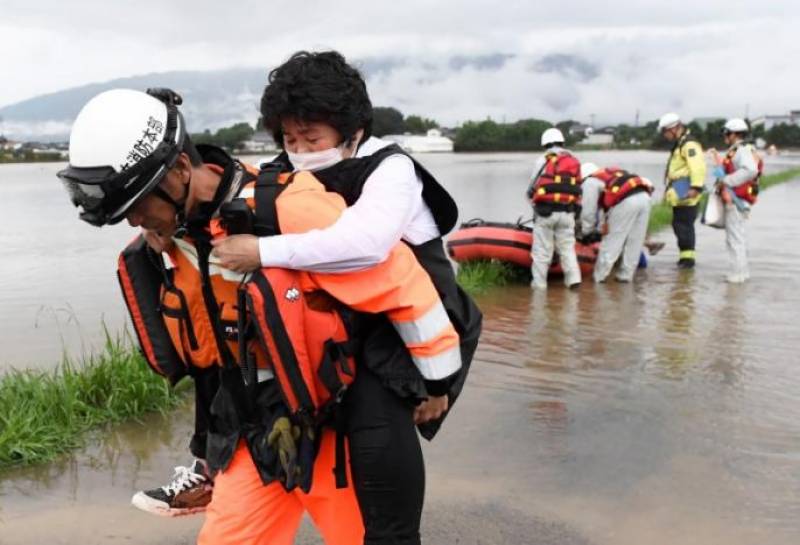 Tokyo, Japan (Reuters): One man was dug out of a landslide without any signs of life and two women were injured as record rains battered southwestern Japan for a second day on Thursday, with flooded rivers forcing 400,000 from their homes, officials and media said.

At least 11 people were missing or could not be reached, including a child.

NHK national television said that parts of Fukuoka prefecture on the southwestern island of Kyushu were hit by 774 mm (30.5 inches) of rain in nine hours on Wednesday, about 2.2 times the amount of rain that falls in a normal July.

Some 7,500 rescuers, including police, firefighters and soldiers from Japan's Self Defence Forces, were mobilized to help with evacuations and search for the missing.

Officials said the military presence could be expanded up to 5,000 people and 50 helicopters if needed.

Landslides were reported in several areas. One man was dug out from a landslide in cardiopulmonary arrest and without signs of life, a standard phrase used in Japan until death is confirmed by a doctor, NHK said.

Chief Cabinet Secretary Yoshihide Suga said: "There are many reports of people whose safety cannot be confirmed, things like 'a child was swept away by the river' and 'my house was swept away and I can't get in touch with my parents'."

"We will keep in close contact with the disaster-hit areas and work with all our energy to save lives and ascertain the extent of the damage," he told an emergency early morning news conference.

Fukuoka and Oita prefectures, both largely rural areas, were the worst-hit by the rain, which was caused by a low pressure area on the Pacific Ocean that fed warm, moist air into Japan's seasonal rainy front.

Residents spent a worried night at evacuation centers set up at schools and government buildings on high ground amid reports of landslides and flooded roads.

"I heard this tremendous rumbling noise and then the house exploded. A tree burst through the wall into the room," a man with wet, dishevelled hair told NHK.

A schoolboy sitting with his family told NHK: "I haven't heard from some of my friends, and I'm really worried."

There were no immediate reports of major transportation problems, but television footage showed a railway line left broken and twisted and roads eaten away by floodwaters.

All operations were stopped at a Daihatsu Motor Co plant in Oita because road conditions stopped staff and parts getting to the plant. The company also cancelled the first shift at a plant in nearby Fukuoka.

A spokesman for JXTG Nippon Oil & Energy Corp said there was no impact from the storm on its Oita refinery operations.

The same area was pounded by heavy rain earlier this week from Tropical Storm Nanmadol, which has since passed out to sea.