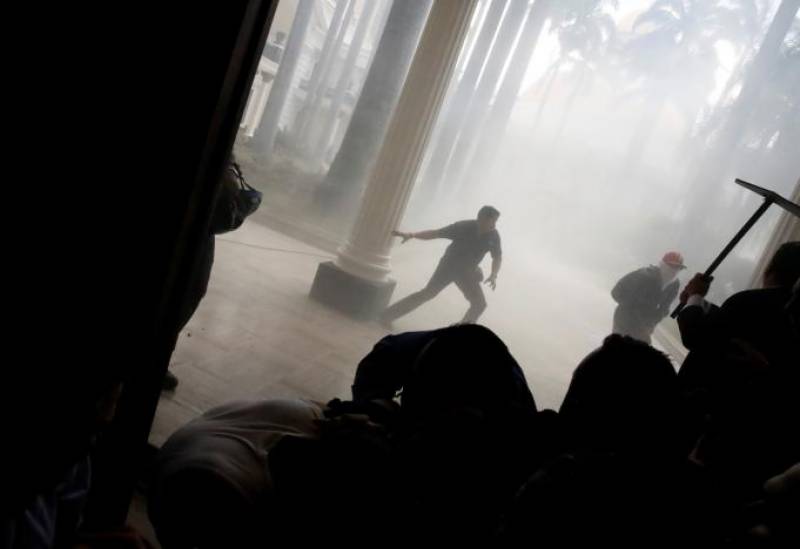 The melee, which injured seven opposition politicians, was another worrying flashpoint in a traumatic last three months for the South American OPEC nation, shaken by opposition protests against socialist President Nicolas Maduro. At least 90 people have died in the unrest, with fighting and barricades frequently blocking cities across Venezuela.

National Assembly president Julio Borges said more than 350 politicians, journalists and guests to the Independence Day session were trapped in the siege that lasted until dusk.

"There are bullets, cars destroyed including mine, blood stains around the (congress) palace," he told reporters. "The violence in Venezuela has a name and surname: Nicolas Maduro." The crowd had gathered just after dawn outside the building in downtown Caracas, chanting in favor of Maduro, witnesses said. In the late morning, several dozen people ran past the gates with pipes, sticks and stones and went on the attack.

Several injured lawmakers stumbled bloodied and dazed around the assembly's corridors. Some journalists were robbed.

After the morning attack, a crowd of roughly 100 people, many dressed in red and shouting "Long Live The Revolution!", trapped people inside for hours, witnesses said.

Some in the crowd outside the legislature brandished pistols, threatened to cut water and power supplies, and played an audio of former socialist president Hugo Chavez saying "Tremble, oligarchy!" Fireworks were thrown inside.

The worst-hurt lawmaker, Americo De Grazia, was hit on the head, fell unconscious, and was eventually taken by stretcher to an ambulance. His family later said he was out of critical condition and being stitched up. Downtown Caracas is a traditional stronghold neighborhood for the government and there has been a string of clashes there since the opposition thrashed the ruling Socialist Party in December 2015 parliamentary elections.

In a speech during a military parade for Independence Day, Maduro condemned the "strange" violence in the assembly and asked for an investigation. But he also challenged the opposition to speak out about violence from within its ranks.

In daily protests since April, young demonstrators have frequently attacked security forces with stones, homemade mortars and Molotov cocktails, and burned property. They killed one man by dousing him in gasoline and setting him on fire.

"I want peace for Venezuela," Maduro said. "I don't accept violence from anyone." Venezuela's opposition is demanding general elections to end socialist rule and solutions to the OPEC nation's brutal economic crisis. The government says its foes are seeking a violent coup with U.S. support.

Earlier, a Venezuelan police officer who staged a helicopter attack on government buildings in Caracas last week appeared in an internet video vowing to continue fighting.

"Once again we are in Caracas, ready and willing to continue our struggle for the liberation of our country," police pilot Oscar Perez said in the video, wearing a military uniform and wool cap, with a Venezuelan flag and rifle behind him.

Perez had not been seen since he hijacked a helicopter last week and flew through Caracas pulling a "Freedom" banner. He opened fire and dropped grenades on the Interior Ministry and Supreme Court but nobody was injured.

Maduro, 54, the successor to Hugo Chavez, called that attack a terrorist assault to overthrow him and lambasted Western nations for not condemning it.

But many government critics doubt the official version, and some even suggested it may have been staged to divert attention from the country's economic and political crises.

In the video, Perez said the attack was "perfectly achieved" with no collateral damage "because it was planned, because we are not murderers like you, Mr. Nicolas Maduro."

Perez said he had staged an emergency landing on the Caribbean coast following the attack, and returned to the capital after hiking through mountains. The Information Ministry did not immediately respond to a request for comment.

Perez, who has portrayed himself as a James Bond-cum-Rambo figure on social media, also is an actor who starred in a 2015 movie about the rescue of a kidnapped businessman.

Although he has claimed wider support within the security forces, Perez's actions so far appear to be a rogue stunt organized by a small group of disaffected policemen.

Venezuela's opposition says Maduro is seeking to consolidate control through a Constituent Assembly, a superbody that will be elected at the end of July. The opposition has promised to boycott the vote, which it says is rigged in favor of the ruling Socialist Party.

Before the attack on them, opposition lawmakers held a session denouncing the president as a "dictator" and approving a plebiscite that the opposition is organizing for July 16, asking Venezuelans what they think of Maduro's plans.