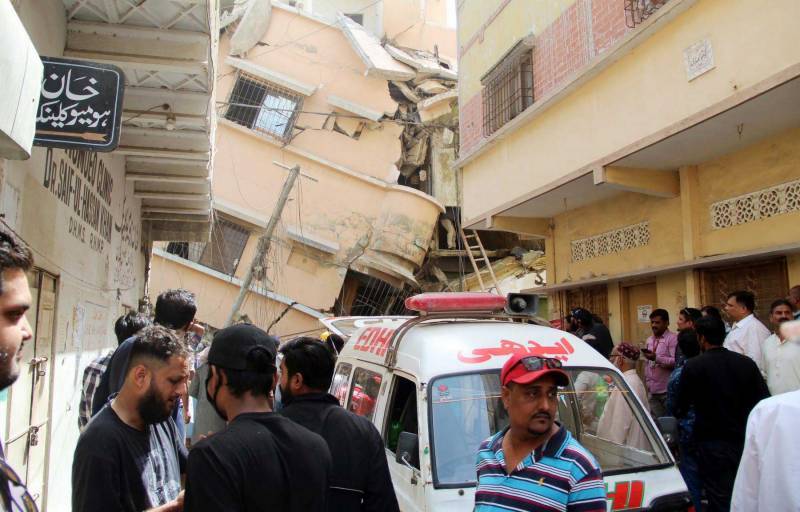 Karachi (Web Desk): The death toll from residential building collapse in Karachi’s Golimar area rose to 16 and a case was registered at Karachi's Rizvia Police Station on Friday.

On Thursday, the residential building had fallen on two adjacent structures, bringing them to the ground killing at least 11 people and injuring several others.

At least three women and just as many children were among the dead, with at least 30 injured. Some of the injured were said to be in critical condition.

The rescue operation continued on Friday to retrieve any survivors still stuck under the rubble.

According to Senior Superintendent of Police (SSP) Central, Arif Aslam Rao, the rescue operation has been slow as they fear that there are more people stuck in the rubble.

He added that the rubble has to be moved carefully as they believe nearby buildings may also collapse.

As per the local administration, the nearby buildings were vacated as well due to this situation, whereas, the rescue operation may continue throughout the day due to narrow streets.

An FIR, citing negligence, damage to private and public property and deaths due to the incident was lodged in the presence of area representatives at Rizvia Police Station.

Talking to newsmen, Minister for Local Government Nasir Hussain Shah has assured that strict action will be taken against illegal buildings.

"At this point, all focus was on the rescue operation and extracting the people stuck under the rubble", the minister said.

The CM had also summoned a report related to the building’s construction.

Shallwani said yesterday that an inquiry had been launched to ascertain the exact cause of the incident.

He said it would be investigated whether or not the Sindh Building Control Authority (SBCA) had approved the building’s design and criminal charges would be filed against those involved in the case.