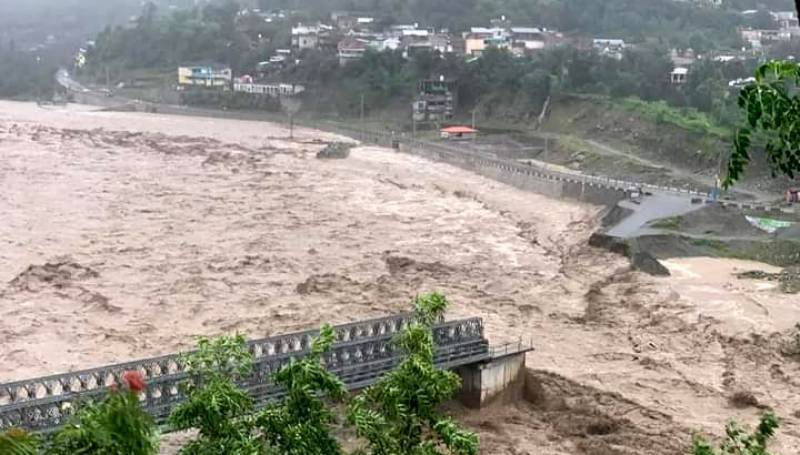 Dadu (Web Desk): Hundreds of villages inundated on Tuesday as the overflowing water from Manchar Lake reached the Indus Highway between Sehwan and Dadu.

The water level remained dangerously high despite the embankments of the Manchhar Lake were given two more cuts on Monday as the single breach given on Sunday failed to reduce the water pressure.

The flood level at the lake, which is spread over 200 square kilometres, reportedly shot up to 126 reduced levels (RL) on Monday after which the irrigation authorities decided to break open the lake from a reduced distance (RD) 50 and 52.

A fourth breach in the lake’s embankment was made on Tuesday at Zero Point that may inundate many more areas including Bhan Sayedabad. Three people were swept away by the gushing waters after the breach was made but were rescued by locals.

Sindh Irrigation Minister Jam Khan Shoro said the water level in the lake had not receded despite controlled breaches. However, the pressure in Dadu, Khairpur Nathan Shah and Mehar would ease after the new cuts, he said.

Speaking during his visit to the relief camp set-up in Qambar Shahdadkot, the premier said that the country witnessed unprecedented loss due to floods.

The 2.5 times increase in the volume of the assistance programme has been made in view of the gross damages of infrastructure and crops in the wake of flash floods.

PM Shehbaz mentioned that the compensation amount of Rs25,000 was being given to each flood-affected family to help them recover their financial losses.