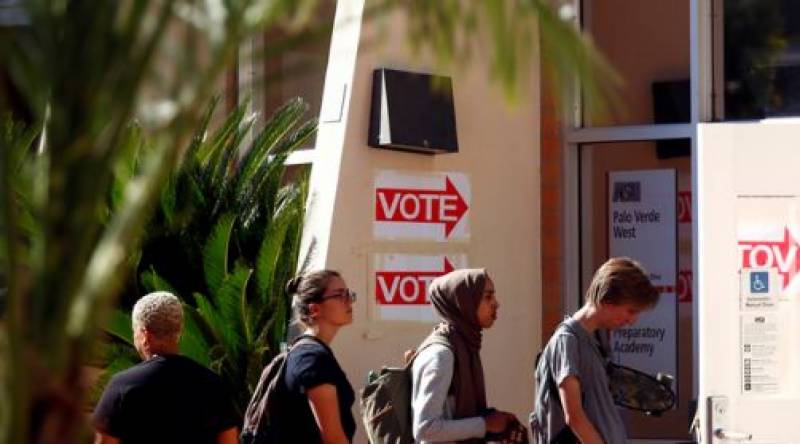 Washington (Agencies): In what can be termed a major blow to President Donald Trump as Democrats seized control of the lower house of Congress on Wednesday in the midterm elections.

Winning control of the lower chamber of Congress for the first time in eight years will empower the Democrats to thwart the agenda of Trump for the next two years.

Fox and NBC television networks called the result in the lower chamber of Congress, while confirming expectations that Republicans will continue to rule the Senate.

The verdicts in the House and Senate were based on incomplete results as counting continued while voting is underway in some states.

Initial results show Democrats have won 209 seats of the House while it is followed by Republican with 181 seats out of total 435. CNN and NBC News both projected Democrats would secure the majority in the House which was ruled by Trump’s Republican in past two years.

The female candidates stole the spotlight in the recent elections as New York Democrat Alexandria Ocasio-Cortez is poised to have become the youngest woman ever elected to the US House at age of 29, BBC reported.

Democrats Ilhan OImar and Rashida Tlaib are also expected to make history in Minnesota and Michigan respectively as the first Muslim women elected to Congress.

In Senate elections, Republicans are leading with 51 seats while the Democrats have managed to grab 49 seats in the upper chamber of Congress. The Trump’s party also holds a slim victory in the Senate.

In this race, Republicans are also leading with 21 seats while the Democrats stood at second position with 18 seats out of total 50, according to initial results.

In Florida, left-wing progressive Andrew Gillum is projected to win over Republican’s Ron DeSantis while Jared Polis is poised to win Colorade race becoming the first openly gay man to be a US governor, BBC reported.

In the final six days before the vote, Trump launched an intense push to help fellow Republicans prevail in the midterms with a breakneck pace of campaigning across about a dozen states. Meanwhile, former President Barack Obama has crisscrossed the country to participate in rallies in an attempt to mobilize Democratic voters, while exchanging jabs with Trump along the way.

The biggest issues that voters are concerned about the most include healthcare, the economy, and immigration, according to a Gallup poll released on November 2.

Among registered US voters, some 70 percent say they are highly interested in the 2018 midterm elections, according to a NBC/Wall Street Journal poll released on Sunday, about 10 percent higher than the previous midterm. 80 percent of respondents told ABC/Washington Post pollsters that they are “certain to vote” or had already voted.