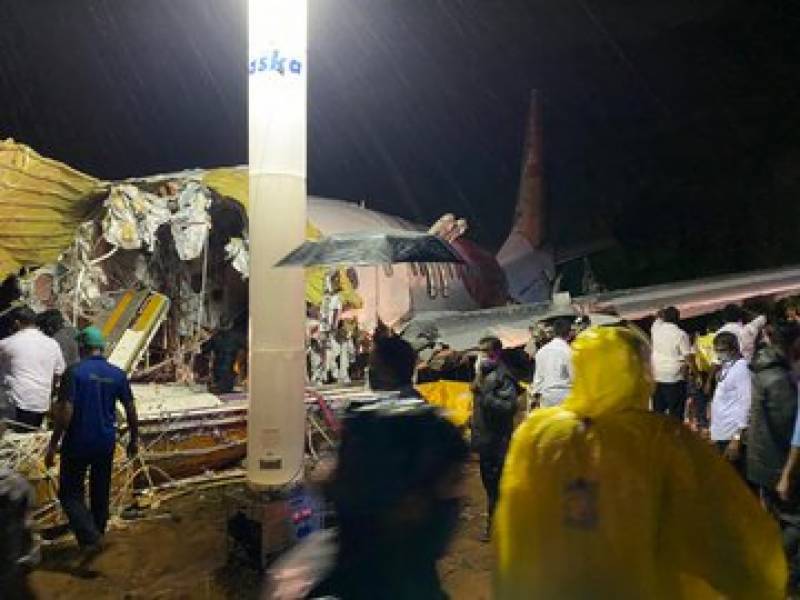 New Delhi (Web Desk): At least 20 people were killed and several others were injured when an Air India Express passenger plane overshot the runway and broke into two after landing Kozhikode airport in the southern state of Kerala in heavy rain late Friday.

According to Indian media and foreign news agencies, the Boeing-737 flight from Dubai was flying home Indians stranded overseas due to the coronavirus pandemic.

The civil aviation ministry stated that there were 190 passengers, including 10 infants, and crew on board.

Indian media quoted air traffic control officials and a flight tracker website as showing that the Boeing 737 twice circled and started to land before it crashed at the third attempt.

The jet repeatedly jumped up and down in buffeting winds before the landing, survivors told Indian television.

The Directorate General of Civil Aviation (DGCA) said only that the jet kept going to the end of the runway in the heavy rain and "fell down the ravine and broke in two".

Several people on board had to be cut out with special equipment. It took three hours to clear all the injured and bodies, officials said.

In his Tweet, Indian Prime Minister Narendra Modi extended his condolences to the bereaved families.

"My thoughts are with those who lost their loved ones," Modi said.

Pakistani Prime Minister Imran Khan expressed grief and sorrow over the loss of lives in an air crash in the Indian city of Kerala.

In a tweet, PM Imran also commiserated with the bereaved families.

In 2010, an Air India Express Boeing 737-800 from Dubai to Mangalore overshot the runway and burst into flames killing 158 people. Eight people had survived the crash.