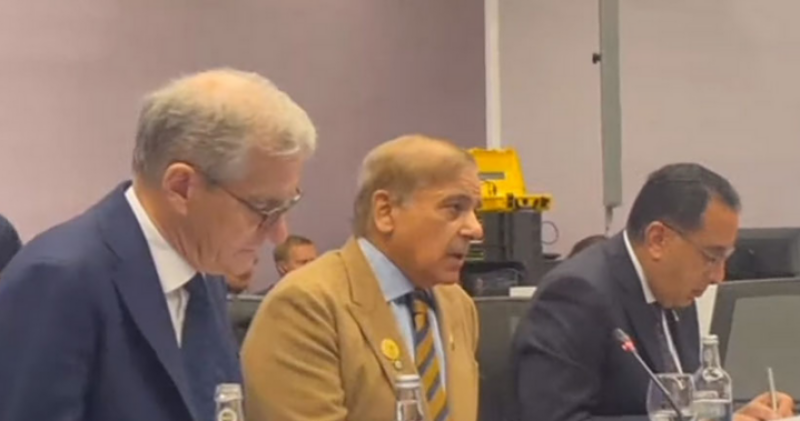 Sharm El-Sheikh, Egypt (Web Desk): Prime Minister Shehbaz Sharif on Tuesday urged the international community to focus on climate justice as Pakistan is one of the most vulnerable countries to climate change despite being only one percent contributor to it.

He was addressing Roundtable Conference on Climate Change and Sustainability of Vulnerable communities on the sidelines of COP 27 Summit in Sharm El-Sheikh, Egypt on Tuesday.

The conference was jointly chaired by Prime Ministers of Pakistan and Norway and attended by a number of heads of state and government.

The prime minister briefed the participants on the situation in the flood-hit areas of Pakistan and the actions being taken by the government for the reconstruction and rehabilitation of flood impacted areas.

He highlighted that it was for the first time that the COP had agreed to formally discuss funding arrangements for loss and damage, achieved through persistent push by the developing countries under Pakistan’s chairmanship of Group of 77 and China.

He said Pakistan has suffered a loss of more than $30 billion due to heavy magnitude of devastated floods.

He said the government is working in its full capacity for the relief and rehabilitation of flood affectees.

While appreciating the significance of the “Global Shield Against Climate Risks” initiative, the prime minister called for renewed international solidarity and cooperation to address the impacts of climate change.

PM Shehbaz underscored that the desired financing facility should serve as the primary vehicle to coordinate and mobilize financial resources to address loss and damage in the developing nations.

He also stressed that COP-27 provided a very timely opportunity to take clear and decisive decisions in this regard.