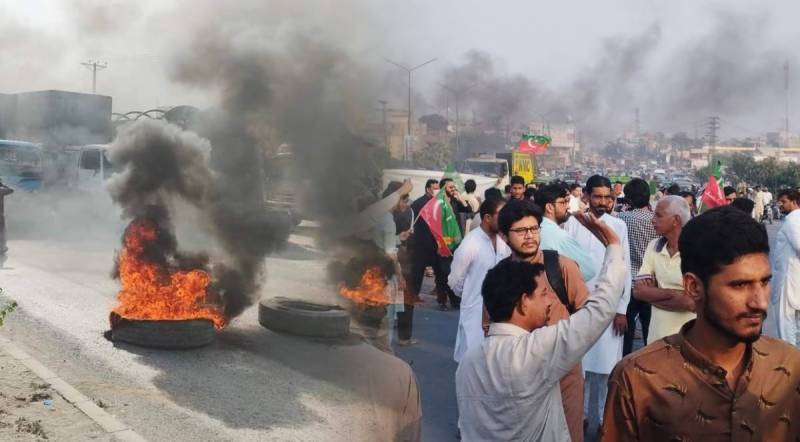 Islamabad (Web Desk): Multiple roads are blocked in Islamabad and Rawalpindi as the activists of Pakistan Tehreek-e-Insaf (PTI) continued to protest in the twin cities on Tuesday.

"We are staging a protest at Motorway Chowk in the federal capital," he said, demanding that the first information report of the attack on Imran Khan be registered in line with the “merit”.

“We will continue the protest until our demands are met,” he added.

Meanwhile, the Board of Intermediate and Secondary Education, Rawalpindi said in a statement that practical examinations due on November 8 and November 9 had been suspended in light of the present situation.

The board said a new date for the exams would be announced soon.

Moreover, the PTI is continuing its protest in the Shamsabad area of Rawalpindi.

The demonstration caused a traffic jam on Murree Road, forcing the public to use the service road.

On the other hand, the Islamabad Police has sought permission for the clearance of Lahore-Peshawar Motorway blocked by PTI supporters, which is also the road leading to Islamabad airport.

In a letter to the interior secretary and chief commissioner, the police stated in the that the airport comes under the banner of vital installations and the ways leading to it hold immense importance.

"All the VVIP movements are made through the same route. The ambassadors and foreigners take the same road to access the federal capital," the letter stated.

Any untoward incident may bring bad name to the country, it added.

As the airport and ways leading to it come under Punjab government's jurisdiction, therefore ,the police sought complete authority to clear the routes and called for directives to Punjab chief secretary and Punjab police chief.

Moreover, the Islamabad police has also asked for all the provinces to be directed to give access to the three toll plazas.