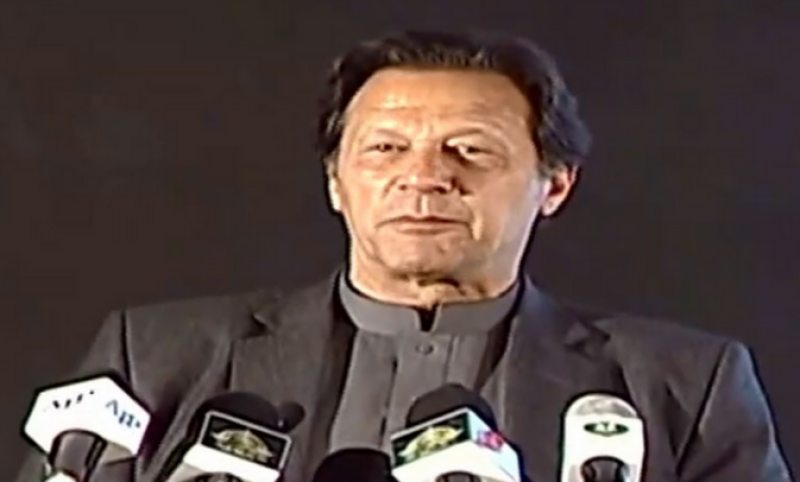 The inauguration was held at the main station of the Green Line project at Numaish Chowrangi.

Addressing the inauguration ceremony, the premier said that first step to modernize any city is to improve its transport system but unfortunately no government paid heed to address the transport  problem of the Karachi in past.

He said that Karachi is the engine of growth of Pakistan as prosperity of the country is linked with the development of the city.

“Every country having a city including London in UK, Paris in France and New York in the United States contributed in country’s development and prosperity, the success Karachi will also help Pakistan achieve progress and prosperity,” PM Imran asserted.

Quoting the example of the Iranian capital, Imran Khan said even though the country was under US sanctions, Tehran had modern facilities because of its efficient management.

"Tehran collects $500 million (in revenue) and spends it through planning. In comparison, Karachi doesn't even collect $30m," he noted, stressing the need to give Karachi autonomy for the local government system to succeed.

Imran Khan said that ground breaking of K-IV water project for Karachi will be performed next month and the project will be completed in next fourteen to fifteen months.

He said through K-IV project, water will be provided to Karachi from Keenjhar lake.

Earlier, addressing the ceremony, Federal Minister for Planning and Development Asad Umar said Green Line project is one of the five mega projects initiated by the federal government in the city that has been completed and its commercial operation will start from December 25.

It is pertinent to mention that, the Green Line Bus project was announced by the Pakistan Muslim League-Nawaz's (PML-N) federal government in July 2014. On February 26, 2016, the foundation stone of the 17.8 km long track from Surjani to Guru Mandir was laid.

The Green Line bus service will comprise 80 hybrid buses that will ply a route of 22 kilometres from Surjani to the Municipal Park near Jama Cloth market with, 23 stations located on each km.

Modern state-of-the-art lifts and automatic ticketing systems will facilitate passengers on every bus station. All details about the arrival and departure of buses will be available on digital screens installed on bus stations.

Each bus will have a capacity of 200 to 250 passengers while the fare is expected to be between Rs20 and Rs50. The buses will have a complete system from USB ports to wheelchairs.

In the second phase of the project, buses will run to the Tower. Under the Green Line Bus project, a two-storey underpass is being constructed at Guru Mandir and Numaish Chowrangi, where not only buses will run on international standards, but accommodation will also be provided.

A control room with at least 900 cameras has also been set up for monitoring of the Green Line bus project and security of passengers to meet the requirements of modern times.