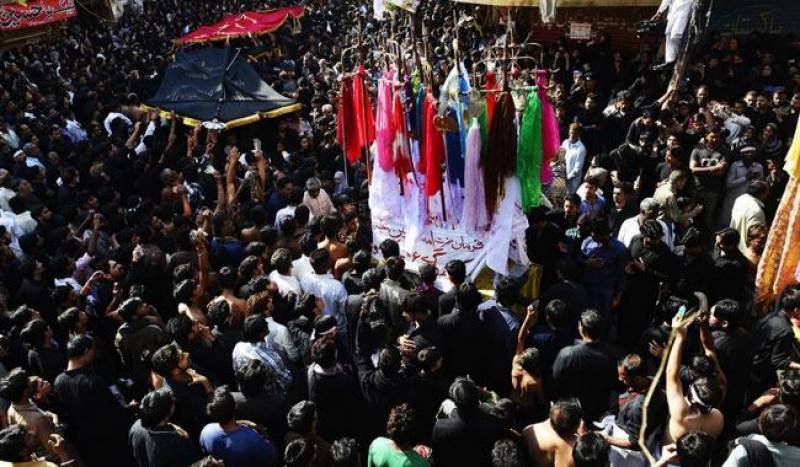 Islamabad (Staff Report/Agencies): Youm-e-Ashur, the tenth of Muharram-ul-Haram, was observed on Tuesday across the country with due solemnity to pay homage to the supreme sacrifices rendered by Hazrat Imam Hussain (R.A) and his 72 devoted companions in Karbala.

Alam, Zuljinah and Taazia processions were taken out in all cities and towns of the country in memory of martyrs of Karbala.

Elaborate arrangements had been made to ensure security of mourning processions and majalis. Police and other law enforcement agencies had been deployed to ensure law and order situation.

In Punjab, Sindh, Khyber Pakhtunkhwa, Balochistan and Gilgit-Baltistan all the roads leading to Imambargahs had been guarded through special security deployment and strict security is being ensured for the processions.

In view of Muharram processions traffic police announced alternative routes and traffic arrangements. Major medical facilities have cancelled holidays of their staff members to meet any emergency on the occasion of Ashura.

Pillion riding had been banned and cell phone service remained suspended in various cities across the country. Closed-circuit cameras have also been installed at sensitive points to keep a watch on majalis and processions.

According to Radio Pakistan, processions were carried out in various cities across the country.

In Lahore, main Shabeeh e Zuljinah procession of 10th Muharram was taken out from Nisar Haveli inside Mochi Gate of Old Walled City which culminated at Karbala Gaamay Shah.

Meanwhile, the central procession of Ashura in Rawalpindi emerged from Imambargah Col Maqbool Hussain, which culminated at Imambargah Qadeemi after passing through its designated route.

Youm-e-Ashur was observed with due solemnity in Sindh including Karachi as well as other main cities of the province.

The main Majlis of the day were held at Nishtar Park from where the main procession was taken out after the concluding of the Majlis.

The procession, after passing through its route at M.A. Jinnah Road culminated at Imambargah Hussainian Iranian Kharadar in the evening.

In Hyderabad, the central morning procession of Ashura emerged at Qadam Gah Moula Ali which after passing through various routes culminated at Karbala Dadan Shah this evening.

In Peshawar, the main Alam and Zuljinah procession of 10th Muharram was taken out from Imambargah Agha Syed Ali shah Qissa Khawani Bazaar this morning which after passing through its traditional routes concluded at its starting point in the evening.

Mobile service has been suspended in Peshawar city to avoid any untoward incident. Similar processions of Tazia and Zuljinah were also taken out in Hangu, Parachinar, Kohat, Bannu and Dera Ismail Khan.

The main mourning procession of Alam, Tazia and Zuljinah was taken out from Punjabi Imambargah Marriabad in Quetta city which after passing through its conventional routes concluded at this very point in the evening.

To pay homage to Imam Hussain (R.A) and Martyrs of Karbala Youm-e-Ashur was observed in Gilgit-Baltistan on Tuesday.

In Gilgit, the main procession started from Central Imamia Mosque at morning which passing through main bazar culminated at the same point in the evening.

The Gilgit-Baltistan administration made elaborate security arrangements to ensure protection of all processions besides security on Karakorum Highway and Naran Babusar road.