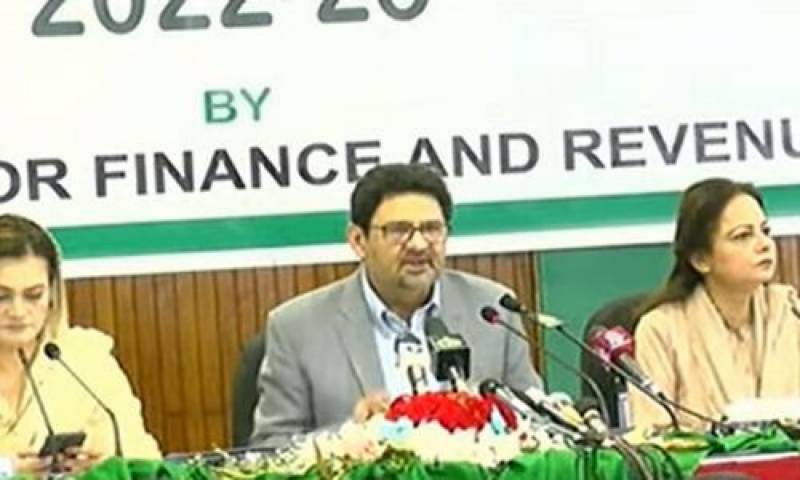 Islamabad (Web Desk): Finance Minister Miftah Ismail on Saturday said that the targets of next year's budget are fiscal consolidation and provision of relief to the masses.

Addressing the post-budget press conference in Islamabad along with Minister for Information and Broadcasting Marriyum Aurengzab, Minister of State for Finance Aisha Ghaus Pasha, he said that the budget of Benazir Income Support Program (BISP) has been increased by 35 to 40 %.

He said that flour, sugar and ghee will be provided on discounted rates at Utility Stores Corporation throughout the year.

Likewise, the minister said Rs400 billion subsidy was given in gas sector coupled with Rs1400 billion circular debt whereas Sui Northern Gas Pipelines Limited (SNGPL) faced loss of Rs200 billion. Gas amounting to $2.4 billion was lost annually at the network of the SNGPL, which had never been accounted.

The finance minister said the government has taken difficult decisions keeping in view the interest of the country. We have reduced our expenditures as well as subsidy on power and gas to reduce deficits.

The minister said, owing to the huge debts taken by previous government, the current government had set aside Rs3,950 billion for debt servicing, which was equal to two defence budgets of the country.

"We have imposed additional taxes on the well-off people while efforts have been made to reduce the tax on personal income tax," the minister said.

He said Pakistan is a dignified nuclear power state and we will have to correct the course of our economy.

However, he assured that the government would provide gas to the industry on rates that were competitive in regional market.

Alluding to the soaring prices of palm oil in the international market, the finance minister said that the package of Rs20 billion has been given to promote the cultivation of oil seeds.

"Special emphasis is being given to bolster our exports, expressing the confidence that these will touch $35 billion mark in the next fiscal year," Miftah said.

In her remarks, Minister of State for Finance Aisha Ghaus Pasha said that main focus of the government is to ensure economic stability and take the country towards the track of growth.

She said the philosophy of the budget in these difficult times had been to put minimum burden on the masses.

"We are providing relief to the common man and this includes the cash amount of two thousand rupees to the deserving families," Pasha said.

Aisha Ghaus Pasha said that subsidy has been given to the farmers to enhance agro productivity and cut the import bill of food items.

"Reducing budget deficit and non-imposition of indirect taxes are anti-inflationary measures which were taken to protect the poor," she said.

The minister clarified that the salary raise of 15% has been given on the pay scales of 2017 and then the ad hoc reliefs will be merged.