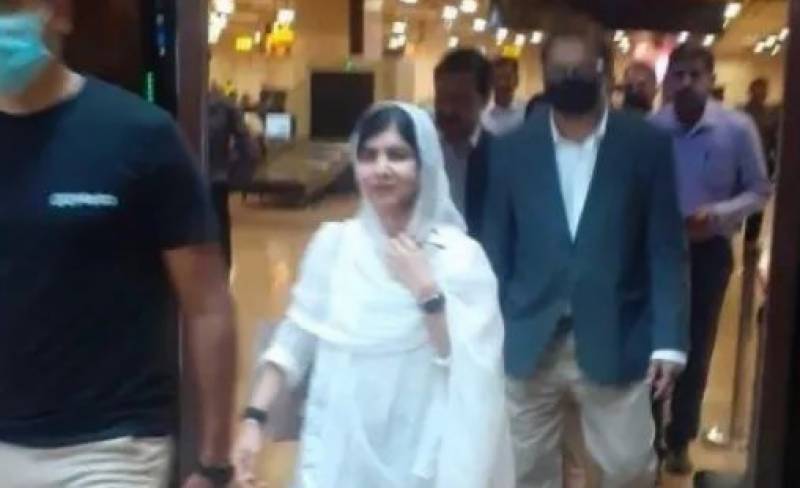 Karachi (Web Desk): Nobel laureate and social activist Malala Yousufzai arrived in Pakistan on Tuesday to visit the flood-affected areas of the country.

Malala landed in Karachi along with her parents amid tight security.

The peace prize winner and girls' education campaigner is visiting the flood-hit areas to raise international awareness regarding the devastation caused by climate change in Pakistan.

Yousufzai is expected to extend assistance from the Malala Fund for flood relief.

In the first week of September, the Malala Fund issued an emergency relief grant to the International Rescue Committee (IRC). The IRC will use the funds to provide psychosocial support to girls and women in flood-hit Sindh and Balochistan.

The funding will also be used to deliver emergency education services to ensure girls continue their education. The assistance from the Malala Fund will help repair and rehabilitate ten damaged government schools for girls.

Pakistan witnessed more than usual monsoon rains this season that sparked countrywide flooding and left a third of the nation underwater, causing damage to standing crops and roads and rail tracks in Sindh and Balochistan.

In 2014, Yousafzai became the youngest recipient of the Nobel Peace Prize at the age of 17 in recognition of her efforts for children's rights.

In 2012, the now 24-year-old survived being shot in the head by a Tehreek-e-Taliban (TTP) gunman after she was targeted for her campaign against militants’ efforts to deny women education.

This is Malala's second visit to Pakistan after she moved to London following the attack on her. She last visited Pakistan in March 2018.