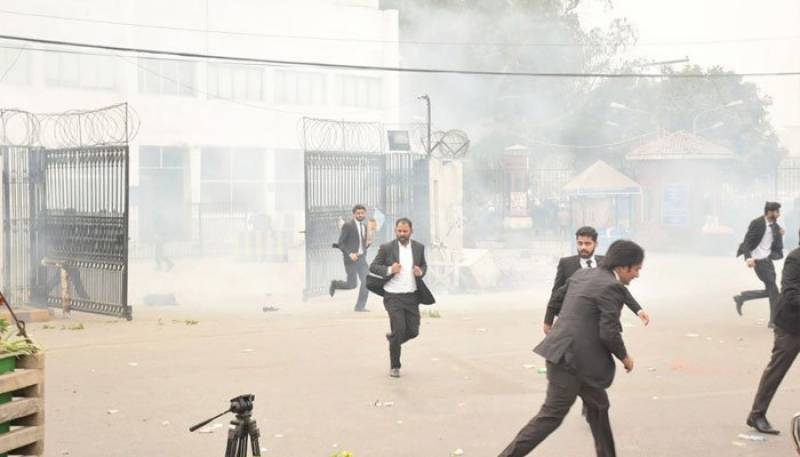 Lahore (Web Desk): The First Information Report (FIR) was registered against more than 250 lawyers who stormed Punjab Institute of Cardiology (PIC) on Wednesday.

According to details, two separate FIR’s were registered against the lawyers under the anti-terrorism act and other charges, including unlawful assembly.

On Wednesday, the angry lawyers stormed PIC including emergency ward where at least four people lost their lives after doctors and nurses left the hospital amid the dispute and halted treatment of patients.

The FIR was registered on the complaint of Saqib Shafi Sheikh on behalf of the PIC under Section 7 of the Anti-Terrorism Act and Section 322 (manslaughter), 452 (house-trespass after preparation for hurt, assault or wrongful restraint), 353 (assault or criminal force to deter a public servant from discharging their duty),186 (obstructing a public servant in discharge of public functions), 354 (assault or criminal force to a woman with an intent to outrage her modesty), 148 (rioting, armed with deadly weapon), 149 (unlawful assembly), 337-H (2) (punishment for hurt by rash or negligent act) and 395 (punishment for dacoity) of the Pakistan Penal Code.

The complainant claimed that he was at his office when the chauki in charge informed him via the telephone operator that 200-250 male and female lawyers were approaching the PIC.

Another FIR, filed by Inspector Intikhab Hussain, called for booking lawyers under terrorism charges for setting a police van on fire.

Inspector Intikhab Hussain said that group of lawyers abused, hurled threats, pelted stones and also opened straight fire at him and his colleagues. The group also set a police vehicle on fire.

Meanwhile, lawyers and doctors have announced to observe strike in different cities of the Punjab province on Thursday.