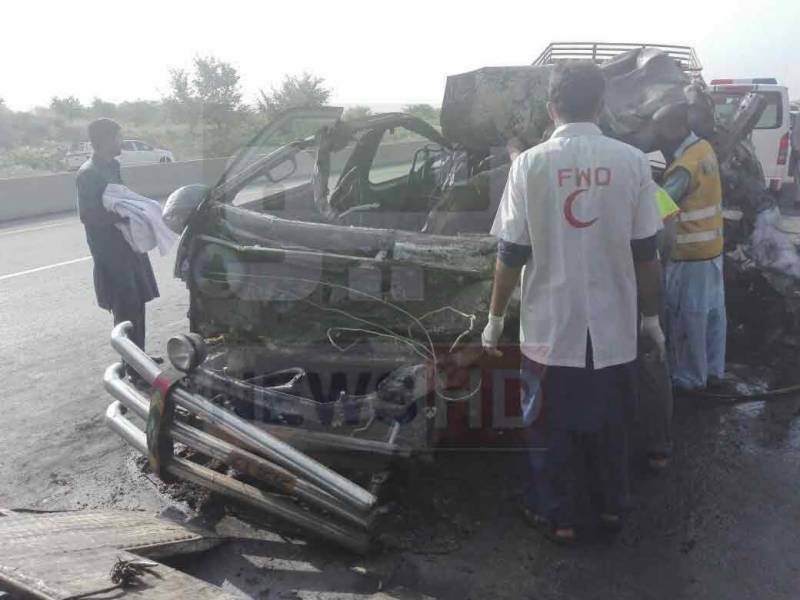 Rawalpindi (Staff Report): At least 14 people, including four children, burnt to death when a speedy trailer collided with a van on the Islamabad-Lahore Motorway at Chakri.

According to motorway police, a passenger van on its way from Jhang to Islamabad rammed into a trailer and caught fire near Chakri interchange on Tuesday, leaving at least 14 people including four children dead.

Three children were among the five passengers who died on the spot; the remaining injured were rushed to Pakistan Institute of Medical Sciences (Pims), Islamabad, where nine more people succumbed to their burn wounds, the police officials added.

The motorway police added that the passengers claimed the driver had dozed off at the time of the accident leading to the deaths. The dead have yet to be identified.

Initial reports suggest that the fire erupted due to the CNG cylinders fitted in the van. The driver of the van was identified as Asif.

Meanwhile Punjab Chief Minister Shehbaz Sharif expressed grief and condolences to the families of the deceased.

Further, Prime Minister Shahid Khaqan Abbasi has also directed the authorities to file a detailed report of the incident.