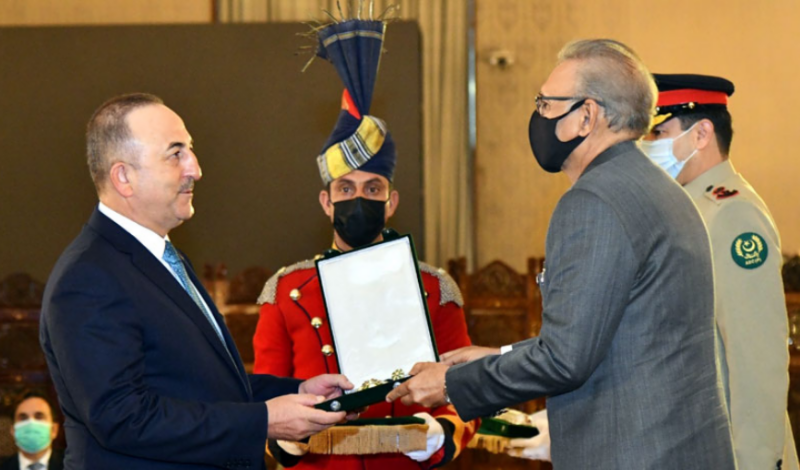 The investiture ceremony was held at Aiwan-e-Sadr in Islamabad on Wednesday.

The event was attended by Foreign Minister Shah Mahmood Qureshi and Minister for Information and Broadcasting Shibli Faraz.

Meanwhile, Pakistan and Turkey have agreed to pursue a joint strategy at the international level on matters of mutual interests in order to further strengthen the bilateral relations between the two countries.

The understanding came at a meeting between Foreign Minister Shah Mahmood Qureshi and his Turkish counterpart Mevlut Cavusoglu in Islamabad.

The two foreign ministers expressed concerns over the rising trend of Islamophobia and stressed for joint efforts to protect the Islamic values.

Both the leaders also emphasized the need for implementation of Pakistan-Turkey Strategic Economic Framework at the earliest.

Shah Mahmood Qureshi also apprised his Turkish counterpart about the prevailing situation in Indian Illegally Occupied Jammu and Kashmir (IIOJ&K). He thanked Turkey for its unwavering support to Pakistan on Kashmir dispute.

FM Qureshi said Pakistan has launched an e visa facility for the Turkish businessmen in order to bolster trade relations between the two countries.

In his remarks, the Turkish Foreign Minister Mevlut Cavusoglu said that the Turkish people consider Pakistan as their second home.

He hinted at continuing joint efforts for promotion of bilateral trade and economic relations between Pakistan and Turkey.