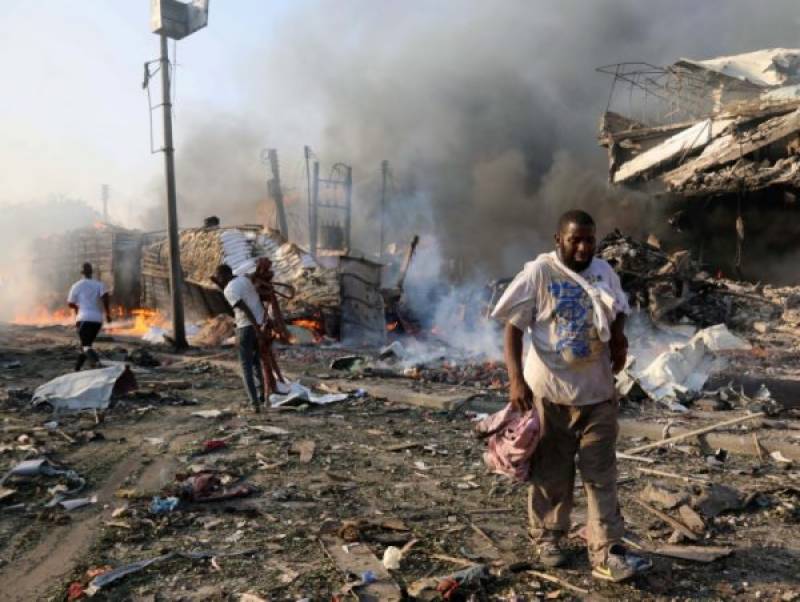 Mogadishu (Reuters): The death toll from twin bomb blasts that struck busy junctions in the heart of Somalia’s capital Mogadishu has jumped to 230, making it one of the deadliest attacks since an Islamist insurgency began in 2007.

President Mohamed Abdullahi Farmaajo declared three days of national mourning and called for donations of blood and funds to victims of Saturday’s attack. At least 100 others were wounded.

Police said a truck bomb exploded outside a hotel in the K5 intersection that is lined with government offices, restaurants and kiosks, flattening several buildings and setting dozens of vehicles on fire.

“The number of dead has risen to 230. We know some 100 who were injured,” Mohamed Hussein, a police official, told Reuters, giving combined figures of casualties. He said the toll was likely to rise. Police previously said 22 people had died.

On Sunday, police and emergency workers searched the rubble of destroyed buildings. They also recovered dozens of corpses the night before, most of which were charred beyond recognition.

Hundreds of people came to the junction in search of missing family members and police cordoned off the area for security reasons.

There was no immediate claim of responsibility, although the Islamist militant group al Shabaab, which is allied to al Qaeda, stages regular attacks in the capital and other parts of the country.

The group is waging an insurgency against the UN-backed government and its African Union allies in a bid to topple the weak administration and impose its own strict interpretation of Islam.

The militants controlled Mogadishu between 2007 and 2011 but withdrew as fighting raged. African Union peacekeepers also drove them out of most other territory they controlled.