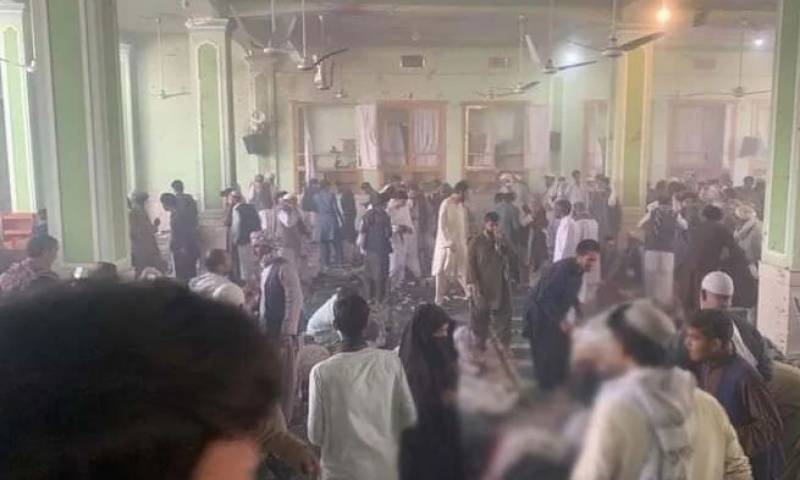 Kabul (Web Desk): At least 37 people were killed and several others injured in a deadly explosion in a mosque in Afghanistan's Kandahar city on Friday.

According to officials, the explosion tore through a Shia mosque during Friday prayers.

The blast marked the second massive attack in a week targeting worshippers.

In his post on Twitter, Taliban spokesperson Zabihullah Mujahid condemned the attack and wrote: "The Islamic Emirate condemns the barbaric attack on civilians in a mosque in Kandahar.

We have directed the security forces to find the perpetrators of such grave crimes as soon as possible and bring them to justice."

"The Islamic Emirates also extends its deepest condolences to the families of the victims," he added.

As per the foreign media, that eyewitnesses said they saw three suicide attackers, one of whom blew himself up at the entrance to the mosque with the two others detonating their devices inside the building.

Taliban interior ministry spokesman Qari Saeed Khosti said authorities were collecting details of the explosion, which took place days after a suicide bomb attack claimed by Islamic State (ISIS) on a Shia mosque in the northern city of Kunduz that killed scores of people.

Photographs and mobile phone footage posted by journalists on social media showed many people apparently dead or seriously wounded on the bloody floor of the Imambargah mosque.

Taliban special forces arrived to secure the site and an appeal went out to residents to donate blood for the wounded. There was no immediate claim of responsibility.

The blast took place just days after an attack claimed by Daesh militants, which killed scores of Shia worshippers at a mosque in the northern city of Kunduz. The full death toll from that attack has been estimated as high as 80.

On Thursday, a bomb ripped through a vehicle carrying a Taliban police chief in eastern Afghanistan killing him and wounding 11 others, officials said.

The blast happened in Asadabad, the capital of Kunar province, targeting the Taliban police chief for Shigal district, said an official from the militant group.