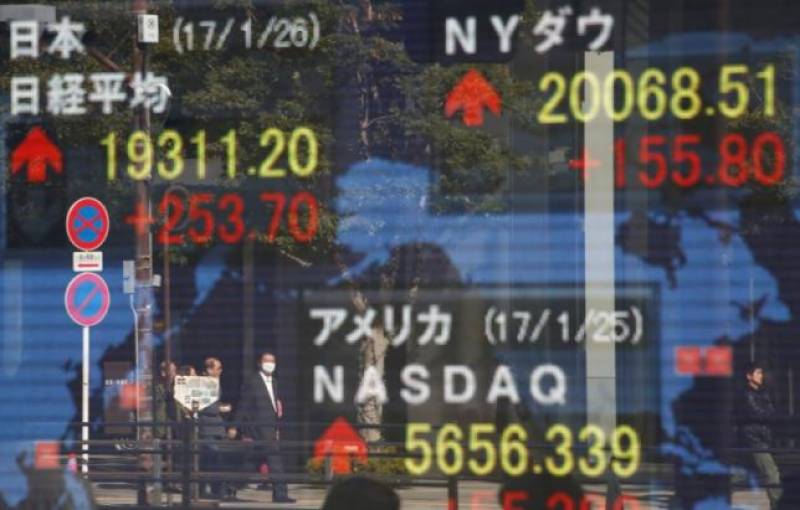 Hong Kong (Reuters): Asian stocks inched to new 19-month highs on Thursday with thanks to an ongoing rally on Wall Street and bolstered by gains in Chinese stocks while the dollar came in for a bout of profit-taking after a recent bounce.

MSCI's broadest index of Asia-Pacific shares outside Japan rose 0.2 percent to its highest since July 2015. It is up by a tenth this year thanks to more optimistic earnings expectations and an unwinding of bearish emerging market bets.

Some investors said markets were looking slightly overvalued from a technical perspective after the bounce in recent weeks. For example, on a relative strength index (RSI), the MSCI Asia-ex Japan index was at its most overbought since 2015. "We are seeing some profit-taking at these levels and unless there is a big correction, the broader uptrend in the Hong Kong market seems broadly intact," said Alex Wong, Hong Kong-based director of Ample Finance Group.

Though latest regional export data confirmed an upswing in economic activity in Asia was gathering pace, political uncertainty and anti-globalization rhetoric from the U.S. made investors cautious of adding big positions.

"In light of these risks, we remain cautiously optimistic on Asian equities, having set a 12-month target for the MSCI Asia ex-Japan of 550 – a 7 percent increase from current levels," said Tuan Huynh, Asia CIO for Deutsche Bank wealth management which manages 312 billion euros globally. Australian stocks gave up early gains and turned lower on the day after new full-time jobs declined in January, a setback after a recent run of positive data.