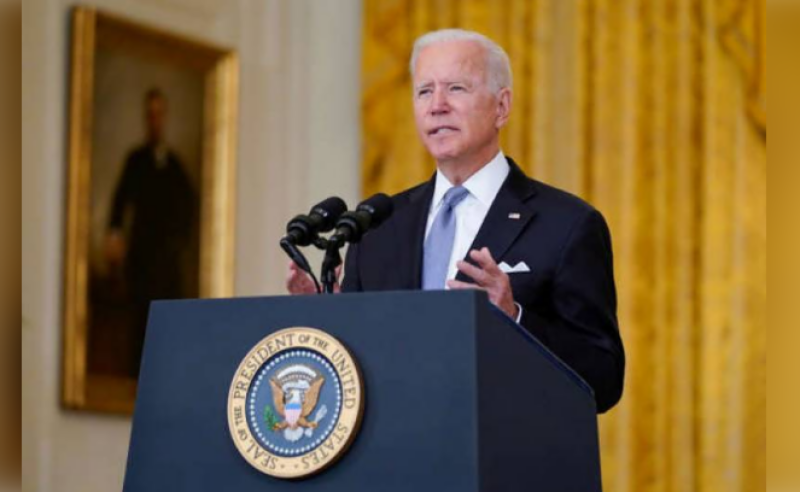 Washington (Agencies): President Joe Biden on Monday defended his decision of withdrawing US forces from Afghanistan despite searing images of chaos in Kabul.

“I stand squarely behind my decision,” Biden said Monday afternoon in remarks from the White House, adding that his administration planned for every contingency. “After 20 years, I’ve learned the hard way that there was never a good time to withdraw US forces.”

The speech marked Biden’s first public comments since the Taliban completed a stunningly swift takeover of Afghanistan on Sunday after Afghan President Ashraf Ghani fled the country and the fighters took over the presidential palace in Kabul.

“I know my decision will be criticized, but I would rather take all that criticism” than violate a campaign pledge and pass on an unwinnable war to yet another US president, Biden said.

On Monday, scenes of chaos unfolding at the Kabul airport as desperate Afghans clamoured to board US military evacuation flights blanketed US airwaves and social media. The pandemonium forced the United States to temporarily halt flights evacuating US citizens and at-risk Afghans until the military regains control of the airport.

The US military deployed 6,000 troops to help secure the airport and conduct evacuations, roughly double the number that was in Afghanistan before Biden ordered the withdrawal.

Biden has been criticized by Republicans, Democrats and other allies over the chaotic withdrawal and collapse of the Afghan government to the Taliban.

During his speech, Biden attributed the swift collapse of Afghanistan to the Taliban to the decision by Afghan political leaders to flee the country and a failure by the Afghan military to fight for the country. He argued that the developments reinforced the decision to exit Afghanistan.

In his speech, Biden also accepted responsibility for the current deteriorating security situation, while acknowledging criticism of his decision.

“I will not mislead the American people by claiming that just a little more time in Afghanistan will make all the difference. Nor will I shirk from my share of responsibility for where we are today and how we must move forward from here,” Biden said. “I am the president of the United States of America and the buck stops with me.”

Biden also echoed other senior administration officials by insisting he was boxed into a corner by the decision by his predecessor, former President Donald Trump, whose administration signed a deal with the Taliban to withdraw U.S. forces by this past May.

“The choice I had to make as your president was either to follow through on that agreement or be prepared to go back to fighting the Taliban in the middle of the spring fighting season,” Biden said.

Biden has long been in favour of shrinking the US military footprint in Afghanistan and announced earlier this year that he would withdraw US forces by the Sept. 11 anniversary. He later moved up his deadline to August. 31.