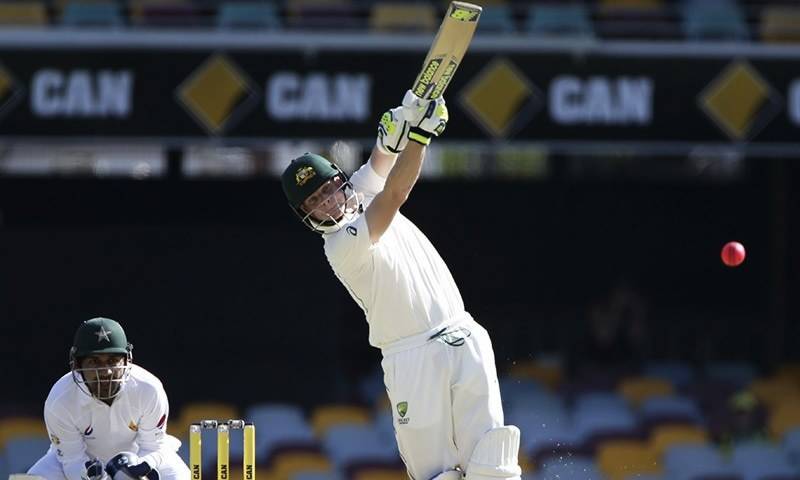 Brisbane (Reuters): Pakistan need 490 to defeat Australia in the test after Australian captain Steve Smith declared second innings closed at 202 for five during dinner on day 3rd of the first day-night test against Pakistan in Brisbane on Saturday.

Captain Steve Smith and Usman Khawaja scored half-centuries to drive Australia to a mammoth lead of 489 with five wickets in hand at dinner on day three of the first day-night test against Pakistan.

Usman Khawaja scored 74 and captain Steve Smith smashed 63 off 70 balls as the home side sought to bat Pakistan out of the game.

Australia were 202 for five in their second innings, with Peter Handscomb unbeaten on 35 and wicketkeeper Matthew Wade on one.

Earlier today, Pakistan were bowled out for 142 in their first innings on day 3rd of the first day-night Test against Australia in Brisbane on Saturday, concluding a first-innings lead of 287 runs.

Wicketkeeper Sarfraz Ahmed and Mohammad Amir resumed with Pakistan on 97-8 and built a bold 54-run partnership before fast bowler Jackson Bird struck to remove Amir for 21.

The caught behind appeal was turned down by umpire Richard Illingworth but captain Steve Smith successfully reviewed it and the technology showed the paceman had feathered an inside edge through to wicketkeeper Matthew Wade.

Rahat Ali was run out for four to wrap up the innings, dismissed after television replays showed he had not grounded his bat when returning to his crease. Sarfraz was left unbeaten on 59.