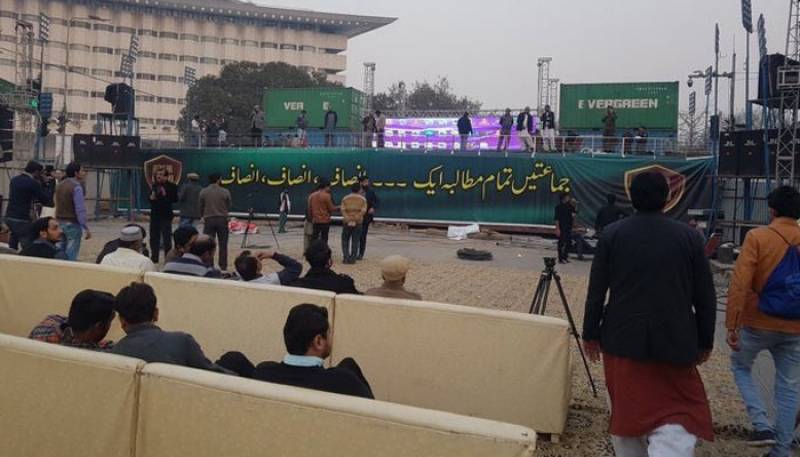 The protest, to be held at Mall Road and attended by major opposition parties, demands the resignations of the ruling party, including Punjab Chief Minister Shahbaz Sharif and Law Minister Rana Sanaullah Khan over the 2014 Model Town incident, which claimed 14 lives and many injured.

On Tuesday, while addressing the media, Qadri said that Wednesday’s protest will be divided into two sessions, adding that, “we are not asking for resignations…they will have to give their resignations”. He said there will only be one stage from where all the addresses will take place.

Meanwhile, the traffic police in the city have released a traffic plan. Chief Traffic Office Rai Ijaz Ahmad said that Nasir Bagh, Aiwan-e-Tijarat and Jinnah Garden have been allotted for vehicles parking.

In order to implement the alternative traffic plan, five DSPs, 20 inspectors, 513 wardens and 24 lady wardens will perform duty, while 8 lifters and three break downs will be deployed on Mall Road.

Commuters coming from Canal to Mall Road, would be diverted from Governor House Chowk towards China Chowk and then towards Ganga Ram Hospital and Mozang.

Traffic coming from PMG chowk, would be diverted from Anarkali Chowk to Lakshmi Chowk from where people can go to Shimla Hill, Beden Road.

Chief Traffic Office Rai Ijaz Ahmad said that commuters could use Rasta App and get information through FM 88.6, a radio station, regarding the situation on roads.