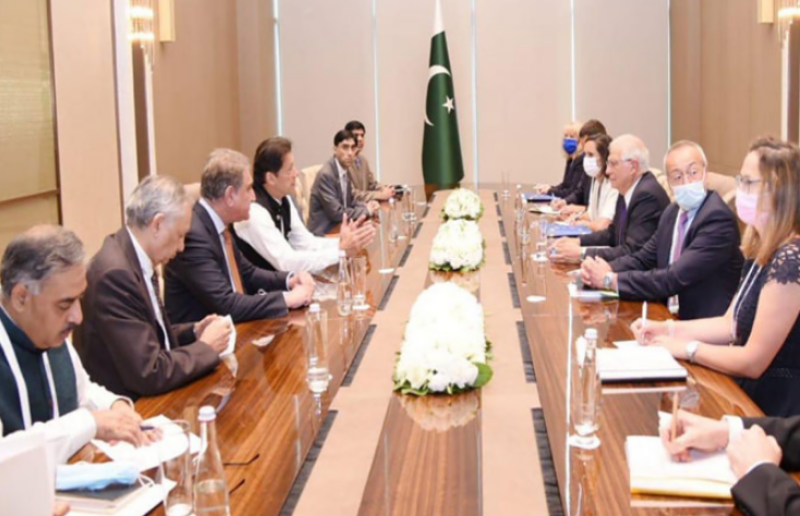 The premier said this in a meeting with European Union’s High Representative for Foreign Affairs and Security Policy/Vice President of the European Commission Josep Borrell on the sidelines of Tashkent conference in Uzbekistan.

He stressed that the conflict could only be settled through an Afghan-led and Afghan-owned political process leading to a comprehensive negotiated political settlement.

The prime minister emphasised the importance of continued engagement of international community following the withdrawal of foreign forces from Afghanistan to facilitate lasting peace.

Imran Khan also expressed concern over the worsening situation in Afghanistan and its negative impact on the security situation of Pakistan.

Earlier on Friday, PM Imran rejected assertations made by Afghan President Ashraf Ghani against Pakistan for “not supporting peace”, categorically stating that Pakistan did not want turmoil in its neighbourhood because peace was in its own interest.

The premier asked Afghanistan to consider Pakistan as a ‘partner of peace’ rather than blaming it for the ongoing unrest, which he said was the ‘outcome of using a military solution by the United States instead of a political one’.

He said that Pakistan's foremost priority is stability in Afghanistan as it directly affects the country and that, “Pakistan will continue to support all initiatives for peace and reconciliation in Afghanistan.”

“We encourage all the neighbours and international stakeholders for their positive roles for a political settlement in Afghanistan,” PM Imran asserted.

The prime minister said that Pakistan has suffered 70,000 casualties and a huge economic loss due to the unrest in Afghanistan.

“Three million Afghan refugees have been living in Pakistan for decades,” PM Imran said, adding that we do not have capacity and economic strength to get more inflow of Afghan refugees.