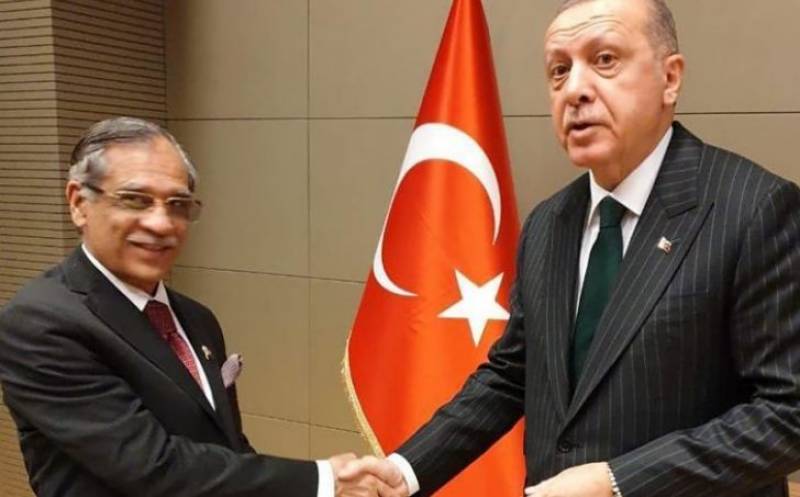 According to a press release issued by the public relations office of the Supreme Court, the top judge during the meeting highlighted the "special love and affection" between the people of Pakistan and Turkey.

Ergodan, while welcoming CJP Nisar to the city of Maulana Jalaluddin Rumi, also expressed his warm sentiments for the people of Pakistan.

The top judge participated in the "Seb-i-Arus" ceremony held in Konya to commemorate the death anniversary of Maulana Rumi, where he witnessed the "samah" [whirling dervishes] ceremony as part of the commemorative events.

Earlier in the day, Justice Nisar held a meeting with the president of the Constitutional Court of Turkey, Prof Dr Zuhtu Arsalan, in Ankara.

According to the press release, the two sides exchanged views on legal and judicial matters of mutual interest.

The top judge briefed his Turkish counterpart on the workings of the judicial system of Pakistan. He also outlined the initiatives being taken by the SC to further the fundamental rights of the people of Pakistan.

The top judge said that the SC was working to ensure that the "executive would take all possible measures to uphold these fundamental rights".

​In this regard, CJP Nisar briefed Dr Arslan on "his initiatives for water management, population control, provision of health facilities, and ensures justice and rule of law".

Dr Arslan briefed the the top judge on the working of the Turkish judicial system, informing him that the Turkish Constitutional Court system was one of the oldest in the Europe.

During the meeting, CJP Nisar and the president of the Turkish Constitutional Court "agreed to further strengthen institutional collaborations between the highest courts of the two countries".

CJP Nisar is on an official visit to Turkey at the invitation of the president of the Constitutional Court of Turkey.