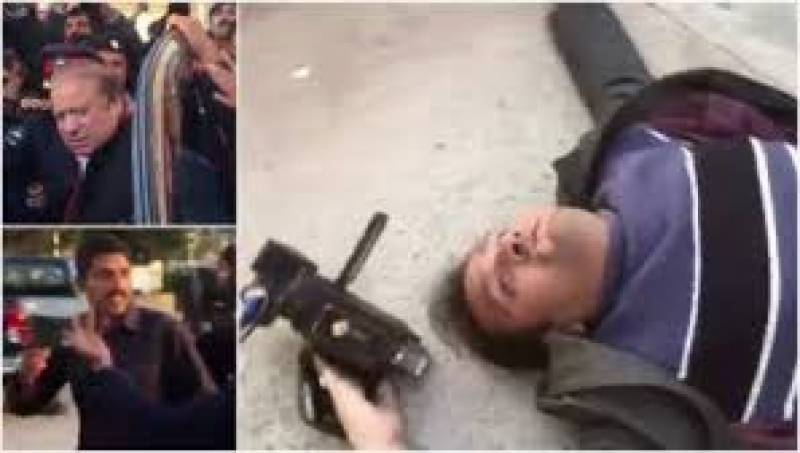 Islamabad (Staff Report): The Islamabad police on Tuesday registered a case against five persons — including the security guards of ousted prime minister Nawaz Sharif — for violently assaulting a cameraman of a private News channel.

The FIR has been registered under Sections 355 and 506 of the Pakistan Penal Code.

Wajid Ali, the victim, was filming PML-N supreme leader when he was leaving the Parliament House on Monday when his security guards attacked and injured him.

TV footage showed Wajid Ali lying on the ground outside the parliament building after a security guard allegedly shoved him for coming in the way of Sharif while recording him.

Another guard was then seen rushing towards the cameraman and kicking him squarely in the face. The guard, as per the footage, then escapes the scene in one of the vehicles of the protocol.

The cameraman, who lost consciousness due to the kick, was shifted to the Pakistan Institute of Medical Sciences (PIMS).

Earlier the day, regretting the incident, former PM vowed to hold the perpetrator accountable and take the incident to its logical conclusion.

Meanwhile, Prime Minister Imran Khan has also taken the notice of the incident and sought a report into the matter.