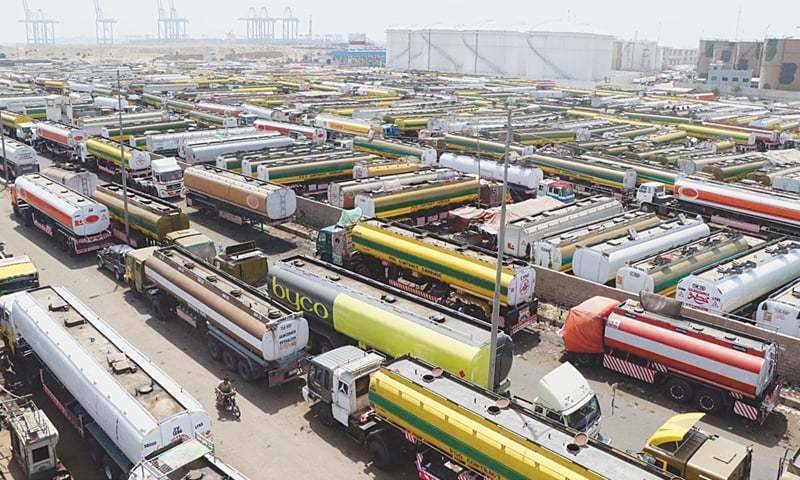 Lahore (Web Desk): All Pakistan Oil Tankers Association (APOTA) has threatened to go on a countrywide strike once again if the government in the next couple of days does not resolve the prevailing regulatory issues.

According to details, Chairman APOTA Yousuf Shahwani was speaking at a press conference in Karachi, where he said the supplies of petroleum products will be ceased again by oil tankers if the government does not fix the issue regarding the specifications of the wheel axle in oil tankers.

Chairman APOTA revealed, Oil and Gas Regulatory Authority (OGRA) declared that more than 3,000 oil tankers associated with different Oil Marketing Companies (OMCs) are unfit. Following that, these tankers were not allowed to supply petroleum products countrywide in spite of the fact these tankers were given a period of next five years to meet the prescribed standards of wheel axle.

The government authorities are reluctant to review the request of oil tankers for the clearance of their heavy vehicles which caused a deadlock between the oil tankers’ association and OGRA and National Highway Authority, he added.

He said, the association will hold its extraordinary meeting with stakeholders and officer bearers to announce a new line of action against the government and authorities.

Shahwani warned, the Oil Tankers Association will announce a countrywide strike if government is fail to resolve the matter till the deadline of August 21provided by APOTA.

In the recent past, in July and March, different issues propped up with Oil Tankers Association and the government that resulted in the slowdown of supplies of petroleum products to petrol pumps. This led to the shortage of oil and caused many inconvenience to businesses and public at large.

Economists and businessmen community enlightened the issue that the shortage of petroleum products end up costing billions to the economy in just a few hours.

They also mentioned that the federal and provincial governments should amicably resolve the issue with oil tankers to keep the cycle of the economy running.