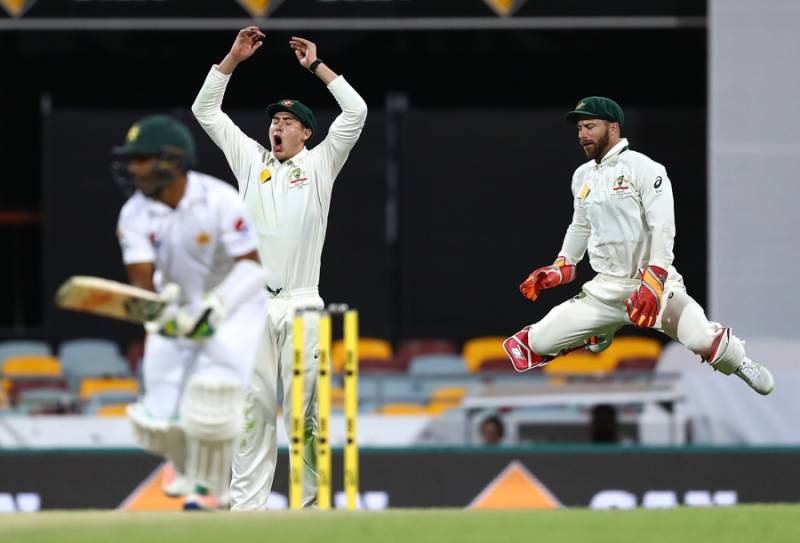 Brisbane (Online): Australia defeated Pakistan with 39 runs in the final day of the day-night Test at the Gabba.

Pakistan bowled out at 450 and met historical defeat. Superb fighting effort against host team has been seen from Pakistan at the end of the best Test match of the year. They're obviously disconsolate, but needn't achieve victory after getting so close.

Earlier today, Asad Shafiq and Yasir Shah continued to defy all odds against Australia at the start of the final day of the day-night Test at the Gabba.

Shafiq scored a thrilling century as Pakistan put up a spirited resistance to Australia on Sunday, frustrating the hosts’ attempts to wrap up the first Test with a day to spare.

Shafiq dashed for three runs off a cut shot in the final over of the fourth day to reach his 10th Test century off 140 balls in the day-night match at the Gabba.

The tourists, who have lost their last nine Tests in Australia, refused to buckle despite the loss of key batsmen Younis Khan, Azhar Ali and skipper Misbah-ul-Haq.

At the close on a storm-hit day, with Shafiq leading the way, Pakistan had just two wickets left and were 382 for eight.

They trail the home side by 107 runs heading into Monday’s final day.

Play was extended by an extra half-hour to seek a result but the tourists held firm.

Steve Smith dropped a two-handed chance at second slip when Shafiq was 72 off Mitchell Starc’s bowling with three regulation overs left in the day.

Shafiq gave as good as he got and led the resistance with a belligerent knock including 10 fours and a six.

Mohammad Amir, in the first year of his return to international cricket following a five-year ban for spot-fixing, hit his highest Test score in a stubborn 92-run seventh-wicket partnership with Shafiq.

Amir’s previous best was 39 not out against England at The Oval in August, but he fell late in the session for 48 off 63 balls with five fours.

The Australian bowlers endured a long grind, with a three-hour final session ending only at 10:09 pm, after a fierce storm lashed the ground just before tea.

The bowlers, who decimated Pakistan by taking seven wickets for 24 in the first innings, were frustrated by a lack of assistance from the pink ball under lights in the second.

Australia are defending an unbeaten run of 27 Tests at the Gabba. Their last defeat here was in 1988 at the hands of the West Indies.

The hosts went into the final night session needing five wickets for victory and removed the first-innings top-scorer Sarfraz Ahmed for 24.

Starc scattered his stumps with an inswinger in the 88th over, his third wicket, and Jackson Bird had Amir caught behind in the 107th over.

Younis Khan had also kept the bowlers at bay but was out to a rash shot 30 minutes before the dinner break.

The 112-Test campaigner fell to an ill-judged reverse sweep off spinner Nathan Lyon, the ball ballooning off the back of his bat for Smith to take an easy catch.

Misbah was caught behind off Bird for five to complete a low-scoring match after his four in the first innings and Younis followed just 18 minutes later.

Starc persisted with a short-pitched plan after a 90-minute storm delay at tea.

It finally paid off when Azhar Ali tried to flick a rising ball down to fine leg, only to edge to Matthew Wade.

Azhar faced 179 balls for his 71 and put on 91 for the third wicket with Younis.

Younis, out for a first-ball duck in the first innings, took 20 balls to get off the mark with a streaky shot through the slips cordon to the boundary.