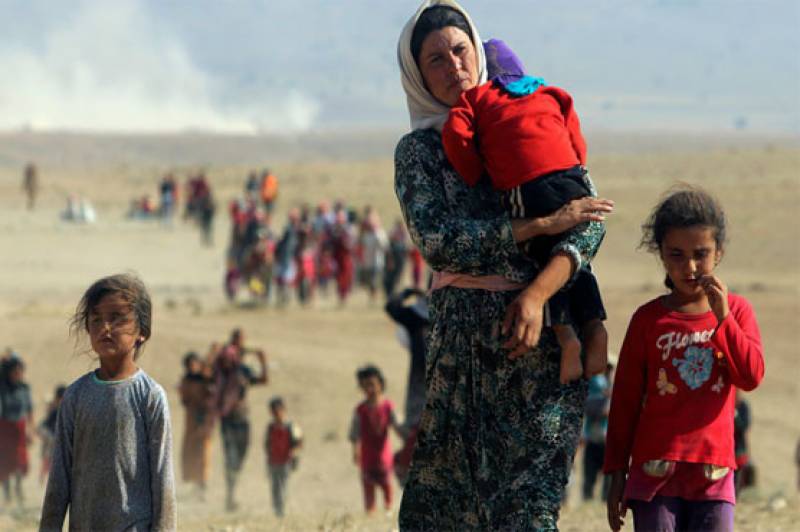 Islamabad (Web Desk): The UN High Commissioner for Refugees has revealed that number of people displaced from their homes across the world due to war and persecution has climbed to a record 65.6 million last year.

The figure that includes refugees, asylum seekers and people uprooted inside their own countries was some 300,000 higher at the end of last year than at the end of 2015, the United Nations High Commissioner for Refugees said.

That was a smaller increase than in the four previous years, prompting the UN agency to warn against complacency. “Although these figures represent small shifts compared to the previous year ... the relatively stable figures mask a very unstable situation,” agency chief Filippo Grandi said ahead of the official release of the report Monday. “This is becoming a forgotten crisis.”

Of the total, some 10.3mn people were newly displaced in 2016, around two-thirds fleeing within their own countries, according to an annual report by the group.

The total refugee population people who fled their home countries was about 22.5mn people, and nearly half of those were children. In Germany, which vastly expanded its acceptance of people fleeing war from places like Syria, the number of refugees doubled to over 600,000 last year.

Syria's six-year civil war remained the largest single cause of displacement, with 12mn people around two-thirds of the population either uprooted within the country or fleeing abroad, the group said. They were followed by some 7.7mn Colombians, 4.7mn Afghans, 4.2mn Iraqis and 3.3mn South Sudanese. Turkey, which has taken in the largest number of Syrians, to a total of 2.9mn at the end of 2015. It has since exceeded 3mn.

Syria is the only country in which a majority of the population is forcibly displaced. South Sudan, with a little over a quarter, has the next-biggest proportion and fastest growing displaced population overall, the agency said. By the end of 2016, 3.3mn people from the world's newest country had fled their homes, more than half to neighbouring countries.

“The international neglect that you see here is matched nowhere else in the world,” Grandi told The Associated Press on Sunday while visiting South Sudan's largest internally displaced camp in the town of Bentiu.

“Wherever you look there are dead ends.” Thousands of South Sudanese now live in UN protected camps, including 80 per cent of Bentiu's population.

The figures are based on the agency's own data and on numbers reported by governments and non-governmental organisations.