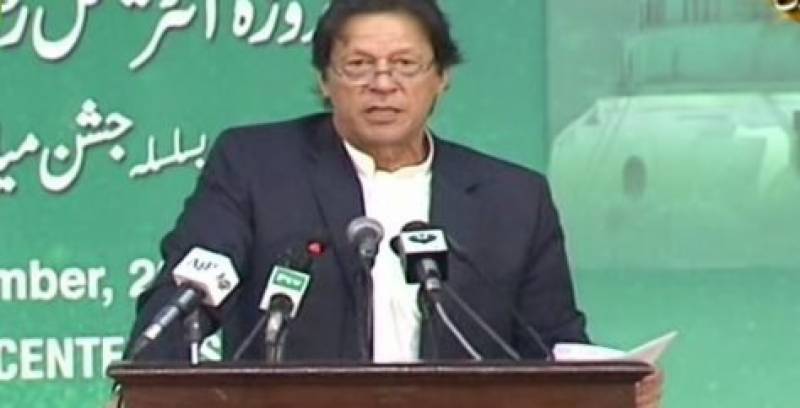 Islamabad (Staff Report/Agencies): Prime Minister Imran Khan has said that Pakistan will spearhead efforts to get passed an international convention on preventing defamation of religions.

Addressing the opening session of international Ramatul-Lil-Alimeen Conference in Islamabad on Tuesday, PM Imran emphasised the importance of learning about Prophet Muhammad's (Peace Be Upon Him) life and teachings in order to become better human beings.

The PM said nobody can be allowed to hurt the sentiments of billions of Muslims under the garb of freedom of speech.

Imran Khan said he will appoint an international law expert Ahmar Bilal Sufi as his special envoy to visit different countries to contact different experts and leaders to get the convention passed.

He said the Holy Prophet (Peace Be Upon Him) achieved this distinct target not through mobilizing resources but inculcating a spirit in His followers to serve the humanity with selflessness.

The prime minister regretted that some elements in the West and Europe are indulging in blasphemous acts time and again on the pretext freedom of expression provoking the Muslim Ummah across the globe.

He said when a chain of reaction comes in the Muslim world; the same Western and European nations dub the Muslims as terrorists and extremists through their propaganda machines.

The PM also urged the religious scholars and intellectuals to promote true teachings of Islam.

He directed the Higher Education Commission to set up special chairs on Seerat un Nabi (Peace Be Upon Him) at three different universities ensuring a specific research on the life, character, and teachings of the last Prophet Hazrat Muhammad (Peace Be Upon Him).

He said it will help educate and enlighten our new generation as to how our holy Prophet (Peace Be Upon Him) carved out the first ever Islamic welfare state of Madina Munawwara.

The PM  reaffirmed the commitment to transform Pakistan into a modern Islamic welfare state in line with the Islamic teachings and idealogy of its founding fathers.

Earlier on Tuesday, a two-day International Rahmatul-Lil-Alameen (Peace Be Upon Him) Conference began in Islamabad under the auspices of Ministry of Religious Affairs and Interfaith Harmony.

The conference has been organised in connection with the countrywide celebration of 12th Rabiul Awwal, marking the birthday of Holy Prophet Muhammad (Peace Be Upon Him).

Over 2,500 people from all walks of life, including parliamentarians, ambassadors, ulema, scholars, students of religious seminaries, universities, deans of universities and representatives of chambers of commerce and industry will attend the moot.

Religious scholars from Egypt, Morocco, Saudi Arabia, and the United Arab Emirates are attending the conference.

This year, a total of 65 books and 81 Seerat research papers were received for participation in the competition.