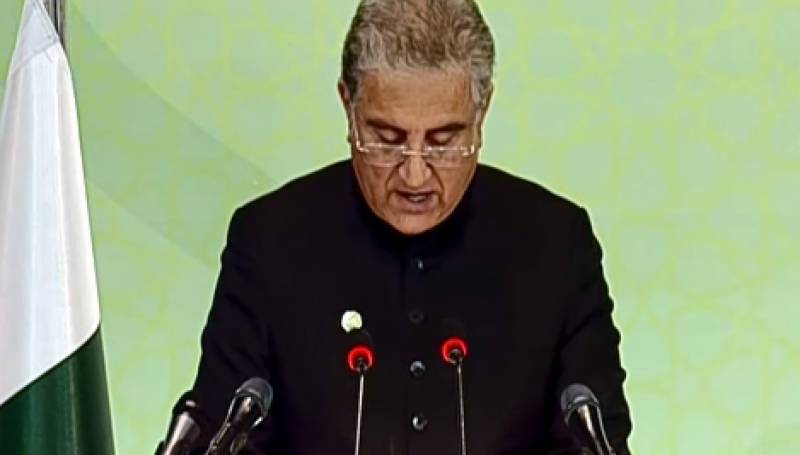 Islamabad (Web Desk/Agencies): Foreign Minister (FM) Shah Mahmood Qureshi on Tuesday said it was time for the Muslim Ummah to forge a collective response to the current turmoil inside its borders and the ongoing global transition.

He was delivering his opening statement after assuming chairmanship of the 48th Session of the Organisation of Islamic Cooperation's Council of Foreign Ministers (OIC-CFM) in Islamabad on Tuesday.

“We must be a reliable partner in forging unity, justice, and development across the globe, but not anyone’s accomplice in aggression or domination," he said.

FM Qureshi said the time had come for OIC to strengthen and equip itself to address contemporary challenges and conflicts confronting the Muslim Ummah.

He mentioned that the Muslim world was facing conflicts in the Middle East, prolonged foreign occupation, and the denial of the right to self-determination, most notably to the people of Palestine and Kashmir.

“The Muslim world’s resentment is increasing due to frequent external interventions in Muslim countries,” he said.

He pointed out that left unaddressed, these conflicts and disputes undermined the unity and solidarity of OIC countries, exposed the countries to foreign interference and intervention, fueled terrorism and extremism, and deflected attention from development goals.

"We must work to prevent outside interference in the Muslim World as we alone can find solutions to internal fissures and challenges," he said.

Shah Mahmood Qureshi said Muslims of Palestine and the Indian Illegally Occupied Jammu and Kashmir (IIOJK) are still reeling under abominable subjugation. For the last seven decades, they have struggled to achieve their inalienable right to self-determination.

Highlighting the grave human rights situation in IIOJK, FM Qureshi said that the RSS-BJP Hindutva-inspired government in India has unleashed a reign of terror by an occupation force of 900,000 in IIOJK since 5 August 2019.

"Indian actions violate the resolutions of the United Nations (UN) Security Council and the OIC on Jammu and Kashmir.

The foreign minister also called for a permanent solution to the Palestinian question with the pre-1967 borders and Al-Quds Al-Sharif as the capital of a viable, independent, and contiguous Palestinian State.

He also called for promoting trade, research and technological innovation in the Muslim world.

Drawing attention toward the evolving situation in Afghanistan, FM Qureshi said addressing the humanitarian crisis in Afghanistan and preventing a collapse of the Afghan economy must remain our top priorities.

The foreign minister encouraged the efforts of the Afghan authorities to eliminate Daesh (IS-K) and stressed effective strategies needed to deal with other terrorist groups in Afghanistan like TTP, ETIM, IMU, and Al-Qaida.

“We must guard against spoilers that wish to continue destabilizing Afghanistan and using its territory to promote terrorism,” he said.

FM Qureshi  expressed confidence that the Conference would strengthen itself by developing and deploying tools for conflict prevention, mediation, reconciliation and peace building.