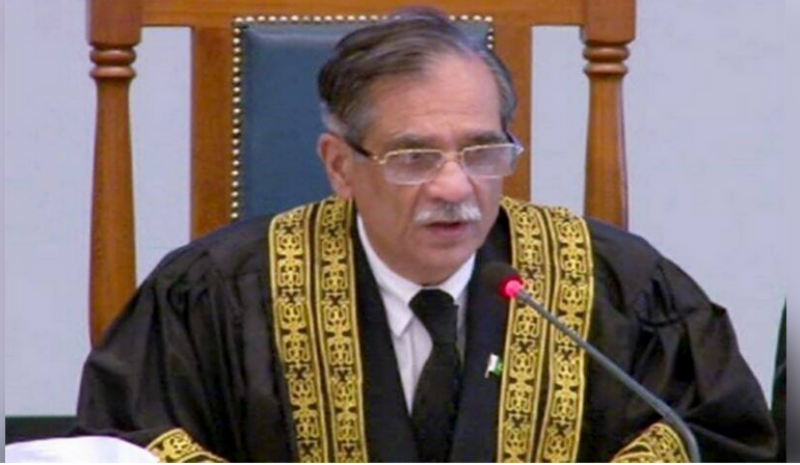 “I have listened to this audio attributed to me, and this is fake,” the former CJP said.

Saqib Nisar, in the dubious leaked clip, can be heard saying: “Let me be a little blunt about it; unfortunately, here it is the ‘institutions’ which dictate judgments. In this case, we will have to penalise Mian Nawaz Sharif.”

“And they say we shall bring Khan Sahib regardless of the merit, we will have to do it, and even to his daughter”, it further added.

The other person, who is not identified till the filing of this report, said, “But, in my view, his daughter doesn’t merit a sentence.”

The website also published the former CJP’s clarification in which he denied contacting any judge of the accountability court and ordering him to pass a verdict against Sharif and his daughter.

“Why would I do that? I have no grudge against Mian Nawaz Sharif,” Mian Saqib Nisar was quoted as saying.

Reacting to the development, PML-N leaders renewed their criticism of Justice (r) Saqib Nisar over the alleged audio clip, calling on the former CJP to explain his position.

Leader of the Opposition in National Assembly and PML-N president Shehbaz Sharif said that the audio clip showed how Nawaz and Maryam were "targeted as part of a grand scheme to keep them out of political process".

In a tweet, the PML-N president said, "Time has come to right the wrongs inflicted on them. The nation looks forward to justice system."

PML-N spokesperson Marriyum Aurangzeb said that a US-based firm has certified the authenticity of the controversial leaked audio conversation.

It is pertinent to mention that the development comes just a few days after former top judge of Gilgit-Baltistan Rana Shamim, had levelled serious allegations against Saqib Nisar, stating in a notarised affidavit that he had been witness to the then CJP Nisar’s direction to a high court judge not to release Nawaz Sharif and Maryam Nawaz on bail at any cost before the 2018 general elections.

On November 15, Mian Saqib Nisar rejected allegations levelled against him by Rana Shamim regarding a collusion to deny bails to former premier Nawaz Sharif and his daughter Maryam Nawaz before general elections 2018.

In a statement, the former CJP said that Rana Shameem was asking for extension as Gilgit Baltistan chief justice but I didn’t approve.” What can I say on this lie of Rana Shameem, he haid said.

Taking strong notice of the allegations, the Islamabad (IHC) had issued show-cause notices to the former top judge Gigit Baltistan and others and directed them to submit their responses by November 26, the next date of hearing.