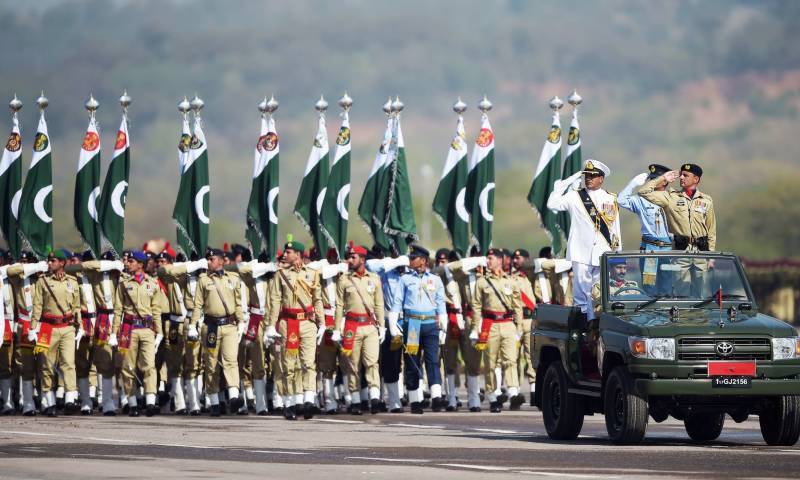 Islamabad (Web Desk): Nation is celebrating 82nd Pakistan Day today (Wednesday) with traditional zeal and fervour and with a commitment to ensure progress, prosperity and a strong defense of the country.

The day is observed to commemorate the passage of historic Lahore Resolution on 23rd March in 1940, under which Muslims of the sub-continent set the agenda of a separate homeland for themselves.

Special prayers were offered in mosques after Fajar prayers for progress and prosperity of the country.

The spectacular and colorful Pakistan Day Military parade was held at Parade Avenue in Islamabad today with three wings of the armed forces displaying their professionalism and military prowess.

The impressive ceremony kicked off with the fly past of fighter jets of Pakistan Air Force and Pakistan Navy led by Air Chief Zaheer Ahmad Babar presenting salute to the chief guest President Dr Arif Alvi.

Formations of fighter jets including J-10C, F-16, Mirage and P-3C participated in the fly past.

Participants of the 48th Council of Foreign Ministers of the Organization of Islamic Cooperation (OIC) session including Chinese Foreign Minister Wang Yi were special guests of the Pakistan Day parade.

Theme of this year Pakistan Day is "Shaad Rahy Pakistan".

Addressing the ceremony, President Dr Arif Alvi said that Pakistan is a responsible atomic power that wants peace with all other nations and respected their sovereignty.

He said that the nation knows the value of the hard-earned sovereignty and independence of Pakistan and said that it will always keep it dear.

"I want to make it clear to the enemy that Pakistan will never compromise on its sovereignty as the nation and armed forces are ready to thwart any hostility," he said, adding that any external aggression would be strongly dealt with.

President Alvi said the expansionist designs of Pakistan’s neighbouring country was a matter of concern for the security and stability of South Asia.

He mentioned India’s illegal occupation in Jammu and Kashmir and urged the international community and the United Nations to stop the ongoing human rights violations.

Referring to the country’s resolve against fighting extremism and terrorism, he said, "Pakistani nation has made immense sacrifices in wars and stood resilient against internal and external conspiracies."

"We should always keep in view the saying of Quaid-e-Azam Muhammad Ali Jinnah to stand united as a nation and demonstrate faith and discipline within our ranks," he said.

He lauded the valour and courage of the country’s armed forces and nation for making their homeland strong and prosperous, and paid glowing tribute to the countrymen who laid their lives for the sovereignty of the country and contributed towards its stability.

"Being a strong and united nation, we vow to keep high the integrity and sovereignty of our motherland," he said.

He expressed confidence that the nation would stand undeterred in the journey towards making the country strong and prosperous.

"This event is the reflection of unity and progress of our nation and also shows the picture of our military strength," he said.

In his message to the nation, Prime Minister Imran Khan stressed that the country came into being after a long democratic struggle and the key to its development lay in "hard work, honesty and morality".

"We need to adhere to the principles of Unity, Faith and Discipline given by Quaid-i-Azam Mohammad Ali Jinnah, and rededicate ourselves to develop Pakistan as a truly democratic welfare state on the model of Riyasat-e-Madina. On this day, it is pertinent to reflect upon the challenges confronting us as a nation," he said.

PM Imran added that his government had brought in long-term reforms and initiatives to alleviate poverty and promote justice and its focus remained on the marginalised segments of society and how to provide them equal opportunities.

"We are now on the path to regain our past glory that was disrupted by previous regimes who gave importance to self-interests rather than national interest and welfare of the people, " the premier said.

He said that the struggle to eliminate corruption and improve moral standards would require the same persistence as our founding fathers persevered during the freedom movement.

Later in the day, PM Imran that his party and government "are committed to carry forward the vision of our Quaid Jinnah for a just society & a sovereign welfare state".

23 March: Today we commemorate the Resolution for the founding of a separate homeland for the Muslims of the subcontinent - our beloved homeland Pakistan. My Party & govt are committed to carry forward the vision of our Quaid Jinnah for a just society & a sovereign welfare state.